In late August, I visited Singapore to give an address at a special conference announcing a government sponsored collaboration involving their Ministry of Transport, the Land Transport Authority and A-STAR, the government funded national R&D centre. I got a chance to meet the minister and sit down with officials and talk about their plans, and 6 months earlier I got the chance to visit A-Star and also the car project at the National University of Singapore. At the conference, there were demos of vehicles, including one from Singapore Technologies, which primarily does military contracting. 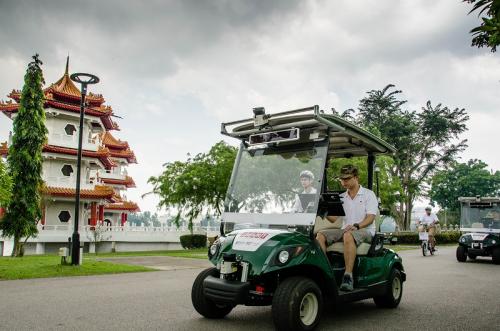 Things are moving fast there, and this week, the NUS team announced they will be doing a live public demo of their autonomous golf carts and they have made much progress. They will be running the carts over a course with 10 stops in the Singapore Chinese and Japanese Gardens. The public will be able to book rides online, and then come and summon and direct the vehicles with their phones. The vehicles will have a touch tablet where the steering wheel will go. Rides will be free. Earlier, they demonstrated not just detecting pedestrians but driving around them (if they stay still) but I don't know if this project includes that.

This is not the first such public demo - the CityMobil2 demonstration in Sardinia ran in August, on a stretch of beachfront road blocked to cars but open to bicycles, service vehicles and pedestrians. This project slowed itself to unacceptably slow speeds and offered a linear route.

The Singapore project will also mix with pedestrians, but the area is closed to cars and bicycles. There will be two safety officers on bicycles riding behind the golf carts, able to shut them down if any problem presents, and speed will also be limited.

Singapore is interesting because they have a long history of transportation innovation, and good reason for it. As a city-state, it's almost all urban, and transportation is a real problem. That's why congestion charging was first developed in Singapore, along with other innovations. Every vehicle in Singapore has a transponder, and they use them not just for congestion tolling, but to pay for parking seamlessly in almost all parking lots and a few other tricks.

In spite of this history of innovation, Singapore is also trending conservative -- this might dampen truly fast innovation, but this joint project is a good start. Though I advised them that private projects will be able to move faster than public sector ones, in my view.

The NUS project is a collaboration with MIT, involving professor Emilio Frazzoli. Their press release has more details, including maps showing the route is non-linear but the speed is slow.