There are lots of players in the robocar space now -- car companies, startups, suppliers, high-tech companies, and two I did not talk as much about -- shuttles and delivery robots. 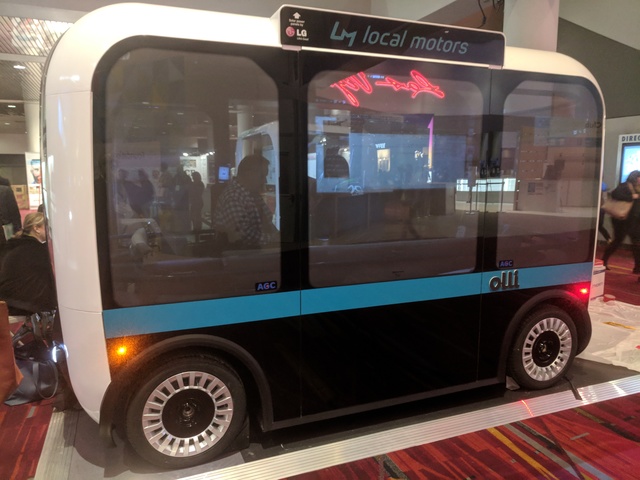 I didn't talk about shuttles that much because they are a stepping stone (at best, though that's pretty good) and a dead end (at worst.) But one company currently working on shuttles, Local Motors is different enough that they merit their own discussion. I've known Local Motors since their starting days as a croudsourced platform for car design for low-volume vehicles.

The focus of Local Motors is not the shuttle you see, but rather rapid development. Their goal is to be able to prototype and then deploy new hardware designs much faster than anybody else, partnering with the providers of the other components to get an edge in a very fast moving industry.

Local Motors began with a push on 3-D printing cars. They wanted to not just design and prototype the cars quickly, but also get them into production quickly in small and medium volumes. Creation of a production vehicle is a massive process, and takes 3 to 7 years even for the big auto OEMs who are experts at it. Almost everybody is scared of getting into that business, and every analysis of the Waymo/Apple/Uber vs. Car OEM battle has pointed to the lack of car development skills and resources as a big disadvantage for the high tech companies. (They have to point out a disadvantage because the rest of the disadvantages are all on the traditional OEM side.)

The Local Motors Olli shuttle seen here is no world-shaker, but it's a reasonably nice shuttle, with some good features for disabled access. What's impressive though is how quickly they put it together. Jay Rogers, CEO of Local Motors, claimed to me that the bill-of-materials (BOM) on the shuttle is just under $10,000. That's astounding. It takes the auto industry massive amounts of scale, experience and time to get BOMs that low. Must custom vehicles are vastly more. The shuttles used by ULTra PRT cost $120,000 each. I don't know the BOM on the Navya, but early models sold for $250,000 each.

LM's bet is this: The robocar world is going to be hugely dynamic. It's going to need lots of different vehicle designs, because robotaxis allow you to fit the vehicle design to the task on a trip by trip basis. The fastest moving player will be the winner.

A few other players have tried their hand at custom vehicle design. Google's 3rd generation prototype, the "Firefly" (sometimes called the Koala by outsiders) was quite expensive to make in quantity 100. For their first real production taxi, they went with a modified Chrysler minivan. Zoox has made a big bet on custom vehicle design, seeking a vehicle with an entirely symmetrical design that goes forward and backward equally. Tim Kentley-Klay, the founder of Zoox, dreamed of a 4-way symmetrical design, with 4 of everything including motors. Over time he's come to learn how hard custom vehicle design is, and how it can slow Zoox down in the competitive space.

GM's first offering will be a modification of the Bolt, mostly taking things out. Shuttle companies (like Navya, Easymile, ULTra, Citimobil2, 2getthere and others) have gone for custom designs, but at high cost. This is in part because people want "walk-in" access and no seatbelts for shuttles which you don't get in traditional car designs. Delivery robot companies have had to go with custom designs because there are no standard designs in this area, but they can do so because the vehicles are simpler and the requirements much smaller.

Local Motors hopes that once they have designed one vehicle, they can quickly produce variants of it for different needs, making it larger or smaller with minor tweaks, enabling handicap access or sleeping or other variations in months, not years. And that they can go from design to production in a similarly short time.

There is much I admire about this approach. The future is still unknown in this business. People who make plans for 2022 are taking a big risk, because any plan for 2022 is probably wrong, and will be beaten by a plan conceived with the knowledge of 2021. The Local Motors approach might win that game.

On the other hand, when the game finally gets big, and you are making a million of even the individual variants of the vehicles, all the skill of traditional volume manufacturing should win on cost.

So is it better to be nimble or big?