A significant milestone was announced this week. Induct has moved their "Navia" vehicle into commercial production, and is now taking orders, though at $250,000 you may not grab your wallet.

This is the first commercial robocar. Their page of videos will let you see it in operation in European pedestrian zones. It operates unmanned, can be summoned and picks up passengers. It is limited to a route and stops programmed into it.

The "catch" is that it stays safe by going only 20km/h, where it is much harder for it to harm things. It's aimed at the campus shuttle market, rather than going on public roads, but it drives on ordinary pavement, not requiring special infrastructure, since it localizes using a prepared laser map of the route. 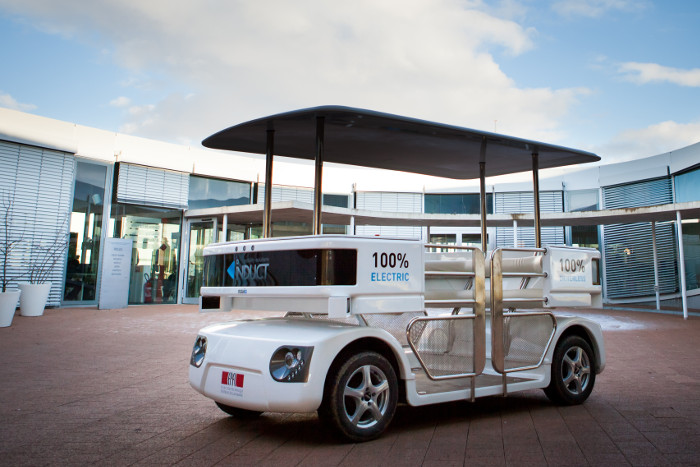 Now 20km/h (12mph) is not very fast, though suitable for a campus shuttle. This slow speed and limited territory may make some skeptical that this is an important development, but it is.

The low speed does make it much easier to make the vehicle safe. But now it become much easier to show that over time, the safe speed can rise as the technology gets better and better. (To a limit -- see my article on the dangers at different speeds.)

The route limitation has two elements. The first is that they want to keep it only in safe locations, which makes sense for an early release. It also avoids legal issues. The second is simpler -- they are using a map based approach, so they can only drive somewhere that has been mapped. Mapping means driving a scanner over the route and building a map of all the details, and then typically having humans confirm the map. This is the same way that the cars from Google and almost all other vendors do it when they are doing complex things that go beyond following lane markers on a highway. As such it is not that big a barrier. While building new infrastructure is hugely expensive, mapping it is much more modest in comparison, though non-trivial. Covering the whole world would take time, but it becomes possible to quickly add routes and destinations.

I single out the Navia because of its ability to drive without requiring any changes to the roads or extra infrastructure. Previous shuttle-style systems like the ULTra PRT at Heathow (which I rode a couple of months ago), the Masdar PRT and earlier Cybercar projects all required a dedicated guideway or fenced-off ground track to run. While the Navia is being kept to private property for safety and legal reasons, there is no technical reason it could not operate in public spaces, which moves it from PRT into Robocar territory.

The Navia is very much designed to be a shuttle. It is open-air and doesn't really have seats, just padded bars to lean against. There is no steering wheel or other traditional control. This belies that common expectation of the first vehicles looking just like traditional cars.