The list of robocar teams grows again with a new project from Oxford university, led by Paul Newman. Nissan is also involved, though the base vehicle is a Bowler Wildcat off-road vehicle.

The project sports a LIDAR design I have not yet seen, with 4 laser units on a mount spinning at what looks like 1-2hz, but they claim a 40hz sampling rate and do have very nice mapping results. They claim their localizer is very good, and demos show it working on rough off-road terrain. Some videos also see it doing waypoint driving without the LIDAR but they talk about why GPS is not adequate.

The Daily Mail story has the best pictures and details. You can also visit the MRG youtube channel. 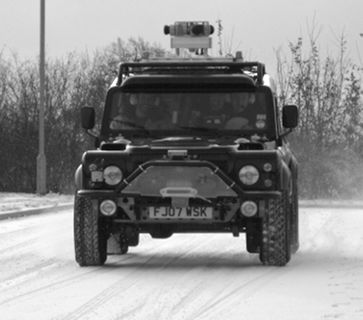 There are additional videos, made by reporters in this BBC news story and a good interview in this Telegraph story.

The claims about the vehicle have a British understatement. They say it will be 10-15 years before it's ready for the roads, and talk mostly about simple problems like handling traffic jams -- something Audi, BWM and VW have all claimed they will release in the middle of this decade, using simpler sensor systems. He also envisions a future arms-race where a car that can do 10 minutes/day of self-driving competes with one that can do 15.

Congestion is their main message it seems, citing the Dept. for Transport's figures of a 25 billion pound cost for congestion in 2025 in the UK.