For a few months, Uber has been testing their self-driving prototypes in Pittsburgh, giving rides to willing customers with a safety driver (or two) in the front seat monitoring the drive and ready to take over.

When Uber came to do this in San Francisco, starting this week, it was a good step to study new territory and new customers, but the real wrinkle was they decided not to get autonomous vehicle test permits from the California DMV. Google/Waymo and most others have such permits. Telsa has such permits but claims it never uses them. 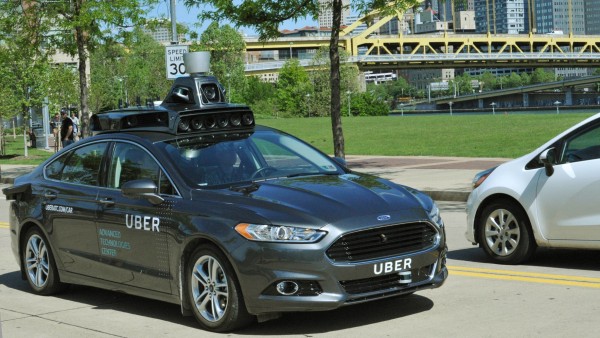 I played an advisory role for Google when the Nevada law was drafted, and this followed into the California law. One of the provisions in both laws is that they specifically exempt cars that are unable to drive without a human supervisor. This provision showed up, not because of the efforts of Google or other self-drive teams, but because the big automakers wanted to make sure that these new self-driving laws did not constrain the only things they were making at the time -- advanced ADAS and "autopilot" cars which are effectively extra-fancy cruise controls that combine lanekeeping functions with adaptive cruise control for speed. Many car makers offered products like that going back a decade, and they wanted to make sure that whatever crazy companies like Google wanted in their self-driving laws, it would not pertain to them.

"...excluding vehicles equipped with one or more systems that enhance safety or provide driver assistance but are not capable of driving or operating the vehicle without the active physical control or monitoring of a natural person."

Now Uber (whose team is managed by my friend Anthony Levandowski who played a role in the creation of those state laws while he was at Google) wants to make use of these carve-outs to do their pilot project. As long as their car is tweaked so that it can't drive without human monitoring, it would seem to fit under that exemption. (I don't know, but would presume they might do some minor modifications so the system can't drive without the driver weight sensor activated, or a button held down or similar to prove the driver is monitoring.)

The DMV looks at it another way. Since their testing regulations say you can't test without human safety drivers monitoring and ready to take over, it was never the intent of the law to effectively exempt everything. You can't test a car without human monitoring under the regulations, but cars that need monitoring are exempt. The key is calling the system a driver assistance system rather than a driving system.

The DMV is right about the spirit. Uber may be right about the letter. Of course, Uber has a long history of not being all that diligent in complying with the law, and then getting the law to improve, but this time, I think they are within the letter. At least for a while.

Velodyne reports success in research into solid state LIDAR. Velodyne has owned the market for self-driving car LIDAR for years, as they are the only producers of a high-end model. Their models are mechanical and very expensive, so other companies have been pushing the lower cost end of the market, including Quanergy (Where I am an advisor) which has also had solid state LIDAR for some time, and appears closer to production.

These and others verify something that most in the industry have expected for some time -- LIDAR is going to get cheap soon. Companies like Tesla, which have avoided LIDAR because you can't get a decently priced unit in production quantities, have effectively bet that cameras will get good before LIDAR gets cheap. The reality is that most early cars will simply use both cheap LIDAR and improving neural network based vision at the same time.