Some years ago I made the proposal that airlines sell half of a middle seat at half price or less so that two coach passengers could assure they would have an empty middle next to them.

I learned a while ago about one approach to this plan, a new "cuddle class" from Air New Zealand also known as the skycouch. It's a row of 3 coach seats that folds down into a very narrow and short bed for two. The idea is that couples can book the whole row for 2.5x the cost of one seat, ie. the empty middle is being sold at a pretty reasonable half-price, or 1/4 price per person.

As I noted earlier, that alone would be worthwhile. Many people would gladly pay 25% more for an aisle or window with a guarantee that nobody was in the middle, and would get together with other solo voyagers to do this. Air New Zealand has for some time offered what it calls the "Twinseat" which is the ability to buy (for a fairly low price around $60) an assured empty adjacent seat "subject to availability." This is something different -- it's simply saying that, if there are going to be empty middles on the plane anyway, the people who pay more at the gate will get those next to them. You can't assure it on a flight unless you make sure you take a flight that won't fill up. 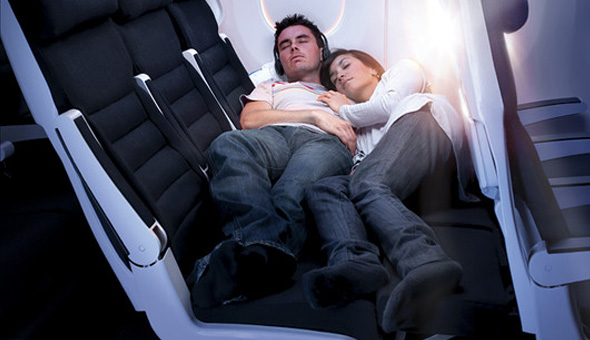 This skycouch seat however has armrests that really go all the way up, and a footrest that comes up to make the whole thing a platform. Frankly, since 3 seats is only 4.5' long and the bed is narrower than a twin bed, you need a couple that sleeps together very comfortably while spooning. While everybody likes doing that for a little while, it's fewer who can do that for a whole night. One person could buy the whole row, I guess, but at 2.5x it starts to approach a nice business class seat, many of which now lie flat. (Mind you I'm picky enough that I don't sleep that well in the business class flat seats, and I have yet to want to pay for the 1st class ones.)

It's nice to the see the innovation, though. I mean some airlines even have coach armrests that don't go up all the way when reclined, and that's a real pain for couples who want to relax together even in the old seating designs.

What would be more interesting, if less romantic, would be a way to have a portable platform that could be installed on top of this row to turn it into two bunkbeds. From a physical standpoint, you could have 4 slots for poles, some reinforcing straps to form X braces on the poles, and a board with inflatable mattress on the top, such boards packed somewhere compactly in the ceiling when not in use. The poles would have to go up and hold a net and bars to stop the top bunkmate from falling out. But the hard part would be making this strong enough to qualify as safe in an emergency landing, since an emergency might arise while these are still assembled, though they would all be dismantled well before landing and they would only be used on flights 10 hours and up. If there were a section of these you could help it along by having no recline in these seats so the seat backs are solid and able to support the upper berth.

In this case, you could have strangers happily paying 125% of the base ticket price for one of these bunks. Lot of work to set up and tear down, though. Probably need a weight limit in the upper bunk. If you can do it at all.

Lufthansa floated exactly that idea for the A380 back in 2007.

So why didn't they?

I've been puzzling over how to make this work for some time and have a blog post planned in the future with some of my designs. Some notes though: