Two bits of robocar news from last week. I had been following the progress of the Stanford/VW team that was building a robotic Audi TT to race to the top of Pikes Peak. They accomplished their run in September, but only now made the public announcement of it. You can find photos and videos with the press release or watch a video on youtube.

This project began with the team teaching the vehicle to "drift" -- make controlled turns while wheels are skidding, something needed on the windy curves and dirt/gravel/pavement mix on the way up to Pikes Peak. Initial impressions were that they had the goal of being a competitor in the famous Pikes Peak Hill Climb -- a time trial race to the top by human drivers, the fastest of whom have climbed in in 10 minutes, 3 seconds in major muscle cars. The best standard cars have done it in about 11.5 minutes, and Audi says a stock TT would take a bit under 17 minutes.

The autonomous Audi's time of 27 minutes, with a top speed of 45mph, is thus a bit disappointing for those who were hoping for some real man vs. machine competition. The team leader, Burkhard Huhnke, downplayed this, saying that the goal was to come to a better understanding of computer controlled cornering and skidding, in order to make better driver assist systems for production vehicles. Indeed, that is a good goal and it is expected that robocar technologies will first appear as driver assist and safety features in production cars.

The actual run was also marred by tragedy when the helicopter filming it crashed.

Earlier, I spoke with James Gosling -- more famous as the creator of the Java language -- about his role in the project. Gosling knows languages and compilers very well, and he helped the team develop a compiler so the interpreted scripts they were writing in languages like Matlab. Gosling's compiler was able to run the resulting code around 100x faster than the interpreter, allowing them to do a lot more with less hardware.

There is strong interest in man vs. machine robocar contests. Such contests, aside from setting a great bar for the robots, will demonstrate their abilities to the public and generate strong public interest. This turned out not to be such a contest, but someday a robot will race to the top of Pikes Peak in better than 10 minutes. It will have a bigger engine, and many more sensors than the Audi in this run, which mostly relied on augmented GPS (extra transmitters were put by the roadside for full accuracy.)

A future car will have a complete map in its head of where all road surfaces are, and their characteristics. It will know the physics of the car and the road better than any human driver. The main thing humans will be able to do is use their eyes to judge changing road conditions, but they don't change very much, and computer vision or sensor systems to make such judgments don't seem like an impossible project. 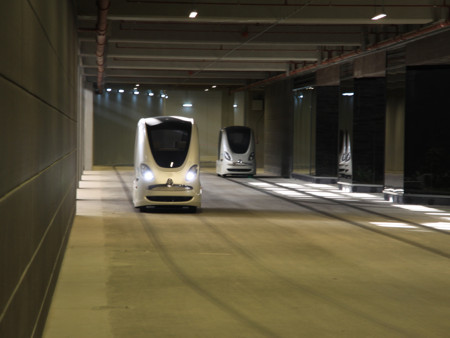 In other news, the greatly-shrunk Masdar PRT system, built by 2getthere Inc. of the Netherlands, has entered production operation in Masdar, an experimental city project just outside Abu Dhabi. The project only has 2 stops for passengers (and 3 more for cargo) at this point. It runs at ground level, and pedestrians use an artificial level one floor up.

These pods have many robocar features. They use rubber tires and run on open, unmarked pavement, guiding themselves via odometry and sensing magnets embedded every 5 feet or so in the pavement. They also have laser sensors which see obstructions on the roadway and any pedestrians. They will stop for pedestrians, and even follow you if you walk ahead, maintaining a fixed distance. The system is not designed to mix with pedestrians, however, and the control software shuts down the relevant section of the track if passengers exit their vehicle outside a station.

The tracking is accurate enough that, as you can see, the tires have left black trails on the pavement by constantly running in the same place.

Photos and video can currently be found at the PRT Consulting site and this video shows it pulling out of a station. There is only one other video -- I hope more will arrive soon.

The economy has scaled Masdar's plans back greatly. The original plan called for a whole city done one floor up with a network of these proto-robocar PRT pods running underneath, and no traditional cars in the whole city.

I believe that's "drifting", not "drafting". Drafting is following another vehicle very closely, to take advantage of the aerodynamic draft.

**Editor: The typo was corrected.**