Generic drugs are cheaper than your insurance copay in many cases

In the health care debate, a major complaint is the cost of drugs in the USA compared to other countries. This is normally blamed on the pharma companies or patents, but I've learned that the pharmacies can be a giant part.

My insurance copay is $15 for a one month supply, and filling that way, all the major pharmacies are the same. But for drugs that I am taking for a longer period, I started checking at the Costco pharmacy for the price not using my insurance. I was shocked to learn that for many generic drugs, the walk-up cost for a 3 month supply was cheaper than that one-month copay. In fact, a drug I recently bought was $11 for a 6 month supply.

While Costco is not as convenient as your local drugstore, getting 3 or 6 months at a time is very convenient. You can also get automatic delivery by mail. Walmart is similar.

You don't have to be a Costco member to use their pharmacy, though members get a slightly better price. However, I recently was pointed to a site called GoodRx which creates coupons which make the price even cheaper -- even at Costco -- but which also apply to many of the major pharmacy chains (Walgreens, CVS, grocery chains etc.) That site has simply created a fake "insurance company" which gets a pre-negotiated price sheet. Look at this table for the generic statin of Lipitor which is one of the most commonly prescribed long term drugs out there. Look at the variation! 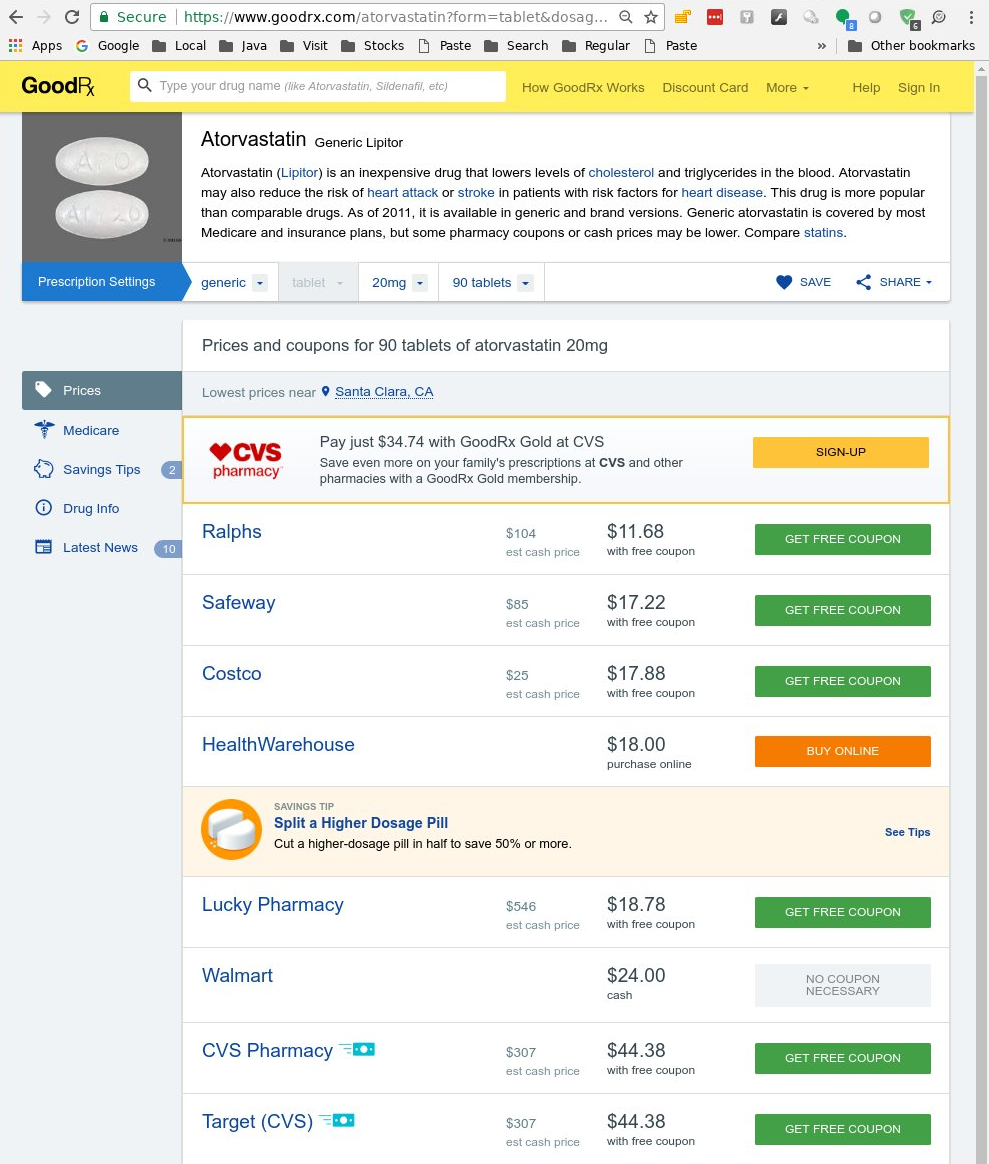 The results there are shocking. Look for a large supply of popular generics and it will tell you the walk-up cash price might be $200 while the coupon price is $12. There is no other product with such a difference. Of course, insurance companies don't pay the $200, they reimburse at the $12 or lower. It annoys me to learn that in many cases, when I paid my $15 "co-pay" the pharmacy was getting nothing from the insurance company and actually charging more than this coupon price. GoodRx is ad supported, the coupons are free and don't even require an account.

One minor downside: these purchases won't apply to any insurance deductibles or max-out-of-pocket you have with your insurance company, though you can probably file the receipts with them to get that, if it's worth the hassle.

Of course this does not work on any drug, and certainly not on name-brand drugs which have no generic form. Also confirm with your pharmacy -- Costco takes these coupons but some may resist taking them. You usually have to get your doctor to actually rewrite the script for a 90 day (or even 180 day supply which is often very little more money) to get a pharmacy to fill a large supply.

It is noted that some insurers put gag orders in their contracts with pharmacies forbidding them from telling the customer that the cash price is cheaper. It's not clear why -- perhaps just to keep up goodwill?