How can robocar transit affect the personal safety of transportation, especially regarding sexual assault?

One "story of the year" for Time was the #metoo campaign, where (mostly) women shared stories of how they had been sexually harassed or molested, to make it clear just how widespread the problem is. Almost all women have a story, or many stories, sad to say. 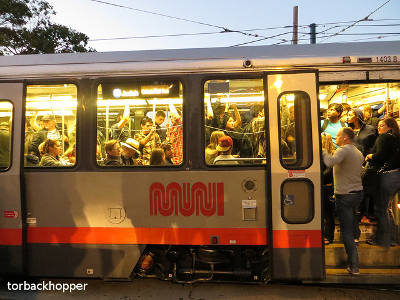 I have frequently heard reports from women of being groped on crowded public transit. People are packed in, and villains use the plausible deniability and anonymity of the packed crowd to grope.

This was spelled out in a Washington Post story on metoo and transit (paywall, but I suspect everybody knows its truth.)

This adds a new positive element to the end of conventional public transit as it switches from large, human driven vehicles on fixed routes and schedules to ad-hoc use of vans and cars with robotic driving -- the question of public safety, and not just against groping.

The first reaction is often the other way. Transit vehicles have a driver on them, and even have transit police. This keeps the public in line. Even an UberPool or Lyftline, where you get into a car with a random stranger, still has the driver there who can assist if there's a problem between passengers. In a robotic shared vehicle, it might be just a few people, or even just two, and nobody else. On an empty road at night. On the other hand, there is much less motive to share robotaxis at night, when the fleet is mostly idle, roads are clear and trips have less in common.

I've spoken to women who do not feel safe in such a situation, and would not ride in such a vehicle, at least with an unknown man. They might wish for the ability to request this in their ride profile. (I have discomfort, though, with institutionalizing the enablement of discimination based on sex, race or other inherent traits.)

One answer for that is that services like UberPool are not anonymous. Because Uber knows who everybody in the carpool is, that's a major deterrent to bad behaviour. A bad actor would not just be kicked out of Uber, but possibly reported to police. Uber knows even more about who its drivers are, but that hasn't stopped there from being fear (mostly promoted by taxi drivers who don't like Uber) of attack by an Uber driver.

Identification sounds good, but it's also a privacy nightmare. Uber requires a credit card and so is unavailable to a large swath of society who can't get such cards. Public transit and taxis have offered us a privacy-positive world of anonymous transportation. Many of us feel that it is a fundamental right to travel anonymously, without being tracked. (Though so many of us have given that up to our cell phone provider.)

How do we reconcile the needs for private travel, safety, the feeling of safety and access for the poor?

One approach, possible only in small to medium vehicles, is a shared car or van with private compartments. A shared taxi might be designed to have 4 doors and 4 compartments with a wall down the middle so that each person is secure and private. You can't design a regular car that way, but a purpose-specific taxi could be built with that design. You could go all the way up to a van. My 16-person van design (see link above) could have 8 compartments if it had extra doors.

For crash-safety, however, it must be possible if the vehicle rolls on its side to get out the other side. This requires there be a means to get through the divider in an emergency, and without much difficulty. This adds a complication to the problem.

Another creepy situation could arise if a person gets out at a stop and the person in the next compartment says, "I've changed my mind, I will get out here too." (You can't imprison people in the car so this must always be an option.) Of course this has always been an even greater risk on public transit which has complete anonymity.

People could express preferences on shared rides. Outside of rush hour, a private ride will always be available, though it may come at an extra cost. During rush hour a private ride may be much more expensive, but crowds are larger and they provide protection. Those with fear -- and money -- can solve their concern that way.

It is possible that the system might allow a woman to say, "I will share only with other women" though it might mean a slight delay in allocating a vehicle. Or they could say "I will only share with at least 4 at all times."

Society might tolerate such a request, but it would likely not allow riders to say, "I will only ride with other white people" and would have a difficult debate over what's allowed and what is not.

If we allow anonymous riding -- and we should -- it might allow some constraints on that. You might insist on riding only with identified people. In this case, you might have to pay more for that privilege, otherwise private travel would be seroiusly impeded. A better solution might have the identities of riders held by a trusted escrow service, which would erase the travel records after the successful completion of the ride. The car could also photograph anonymous passengers, again ideally destroying records a day after the ride, and only offering them to police with a warrant.

Even with identity escrow, there is a lot of privacy risk. Today's world of public transit is fairly anonymous. You can put cash into a box and ride with nobody knowing anything about it, though train platforms often record video. This world could easily end in the world of robotaxis or even of Uber.

But even without private compartments, or identification, or preferences, robocar transit is going to be different. The packed bus or subway car will either vanish, or become an option easily bypassed without a lot of money. And that means, at least, the end of the random groper on the train.

Do you have or know of any analysis on what the distribution of vehicle size (passengers per vehicle) is expected to be with robotic driving? I am surprised by the amount of focus on typical 4 person car vs single passenger and small busses/large vans.

Full analysis will require detailed models. However, we can say a few things. Most trips are alone, so in theory most cars would be single person cars, but you can carry a solo rider in any size vehicle, so chances are fleets will have more larger vehicles and be inefficient with them at times. Most common sizes will probably be 2 and 4 pax, with 2 pax being half width and possibly face to face and often used for solo riders.

Group vehicles (4 or more) will be primarily for rush hour. What is most efficient depends on the distribution of trips in the town, and the road capacity. If road capacity is low, larger vehicles will be needed for the undercapacity regions, and those vehicles can then stop and distribute their passengers to different smaller vehicles to take people the last mile in their different directions.

There's also the fact that 4 person vehicles are what the industry knows most about making, and they fit in our roads and parking spaces. (Though an electric vehicle offers the option for possibly 16 passengers in the 20' by 7' footprint of typical lanes and parking spaces. Possibly wider, since a robot can drive a lane so exactly it could take up most of it more safely.

Big vehicles (30 pax and up) are only efficient at rush hour or with passengers willing to wait to combine their trips. They also consume a lot more road space in terms of getting in your way -- of course they take less road space per person, but they are not as nimble and block more of a lane.

The informal car pool group around Washington DC developed its own approaches to the safety of women getting into cars with strangers. At www.slug-lines.com you can go to the etiquette and rules page, http://www.slug-lines.com/Slugging/Etiquette.asp, and read some of the approaches that have developed over the years, such as the rule: The line does not leave a women standing alone. I can't vouch for the effectiveness of this rule or the others. Perhaps other readers are more familiar with the history of the slug-lines.

Is there NO use for obsolete mining equipment, other than perhaps a nearly identical but 'lighter' new currency?

I realize that the Antminers are ASICs, but is there really no significantly different use for them?

I'll get out here too

The I'll get out here too problem is probably less of a worry in one way, the passenger will likely be dropped at their doorstep, so a stalker has a very small window of opportunity.
One way it is worse of course is that your address becomes known.

Why not design a blockchain-enabled robocar service?

People have proposed it

But I can't say I see much value in it. Blockchains are valuable when you can't easily find a trustable party to manage your transactions. I don't see that as true here.

It's not going to be anonymous. Too many difficulties, too many lost opportunities for profit, and, most importantly, way too little demand. People just don't care about this sort of stuff. Not enough to be willing to pay more to avoid it, anyway.