A hiker online asked me about when we might see a robotic "pack mule" to make long hikes easier. The big problem is energy (and noise) since right now the walking robots that exist use a lot of energy to travel, and most hikes involve some terrain you can't do on wheels. 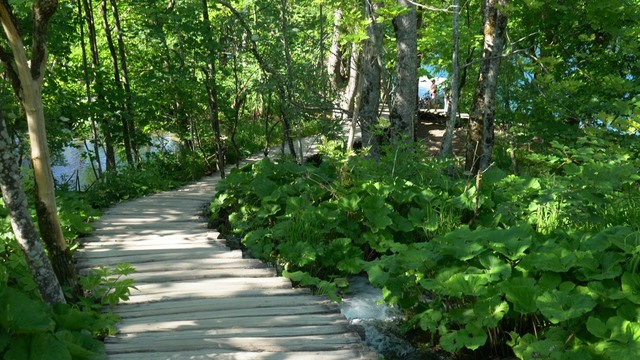 He hoped for solar charging, but most hikers like to hike under cover away from the burning sun. The robot probably wants to be electric since nobody wants a loud engine on a pack robot on the trail. That's a problem.

For some, the idea of the pack robot goes against the self-sufficiency they seek hiking or camping. These ideas are not for you. If you like the idea of the hikes that have a series of stocked cabins spaced one day apart, you might be interested in what robots could do.

The first thing that came to mind was flying drones with a 25lb or so capacity. Near the end of your day's hike, you would find a suitable clearing on your map nearby, and summon the drone to it with as much of your overnight gear as it can carry. Sleeping pad, bag, light tent, fresh batteries, food etc. You would only have to carry your essentials, such as water, lunch, first aid, phone, emergency kit and whatever the drone can't handle.

In one mode the drone would stay there overnight, and fly the gear back to a charging station in the morning. The charging station could be on the grid, or it could just be a set of solar panels placed in suitable locations near the trail. The drone can wait there all day, charging. (There is an issue if it's a dark rainy day, though.) More likely, though, it flies to some station operated by a service, the same service that rented you this drone and maybe rents you the gear.

Another option would be for the drone to fly back empty to a grid or battery based station, then fly empty to you in the morning. That means more range, as such a drone will use a great deal less energy to fly unladen. This is less efficient on a total basis, though.

The drone could fly back to a service depot not just for an overnight charge, but it might even serve several campers if the trip is short. Since everybody wants to arrive at camp around the same time before sunset, and leave around the same time after sunrise, you can do this in a few different ways:

A ground robot could also do the trick of heading off unladen to get a recharge. With robot sensors, it can operate just fine in the night. It would need to be pretty silent if it will pass by other campers, which might not be easy.

The most efficient ground drone uses a combination of wheels and legs. There are a few designs which have legs with wheels on the end of them. When walking, they lock the rubber wheels and use them as feet. With all terrain wheels, such a robot could probably stay on wheels for a large portion of many trails, switching to leg mode only in the bush and over obstacles. With maps of the trails and your location it could even be slower than you in the bush and catch up on the flatter parts.

As long as the recharge stations are available and not too many miles from the campsites, it could get to them. Pure solar recharge is unlikely to work, but solar stations with batteries to handle the cloudy days could work. Another interesting option might be a small hydro generator that can be dropped into streams.

The big issue of course, is can you depend on this system? What if weather, or breakdowns or other causes mean that the robot doesn't get your sleeping gear to you. Hopefully that's rare, and certainly rare without advance warning, but it's hard to make it impossible.

Some options then include:

The systems where a robot comes to you of course require a fully reliable communications network. Today many back country trails don't have that, but this will change with time.

The long hike in the future, for those who want the burden eased, will consist of a robotaxi ride to one trailhead, a hike with supplies delivered en route, and getting another robotaxi at a remote trailhead with no need to backtrack or loop.

Of course, if you are going to have a service, why not just go back to the model of cabins spaced a day apart on the trail? Cabins are nicer to sleep in, but fix your schedule. Slower and faster hikers may not like them, and they often have to be booked long in advance. With robot delivery of your overnight kit, you can stop where you want, and there's no real limit on how many people can use the service, especially if you are willing to plan slightly in advance and aren't worried about theft.

Some would view this technology as a betrayal of what hiking is supposed to be about -- solitude and self-reliance. Even people who have highly resented the weight of their packs. Empty trails could become comparatively crowded. On the other hand, it would open up trails to people who otherwise would not be ready to hike them.

This will get even bigger if you combine this with "flying cars," which I have already written will have serious consequences as they give access to the wilderness to even the disabled and aged. They, and this, would allow anybody to hike even the most remote and difficult trail segments in the world. In the extreme, a hiker could be dropped off, hike, and sleep in a luxury hotel each night before being returned to the next good segment of the trail.

Self driving cars will enable more shuttle hikes, unconstrained by the need to loop back to where the car is parked, and without having to get somebody else to do the car shuttle. Drive to point A, unload and start hiking, car self drives to point B. In particular, I look forward to being able to do such shuttle hikes solo.

Solo = more likely to get in trouble on the trail? More need for rescue? Rescue as a business?

Non loop shuttles also apply. to biking (especially for thrill seekers who want the rush of downhill without the slog of uphill); and boating (especially white water, but also chain of lakes...)

Hmm... have you ever been hiking, and encountered a large like or river that you had to hike miles around? Too deep to ford, and swimming might not be an option. Automated ferries?

Think about inn-to-inn hike/bike/trek - eg in Vermont or England’s Lake District, where the inns are on roads, but the hikes are on trails that go between. Self driving cars might hurt such inns, since having your car drive your camping gear to road access spots might be more of an option.

Back to water: I like open water swimming, but solo swim hiking has never been much of an option. Autonomous vehicles, especially boats, may enable this.

Yes, the need to loop hike back to a car goes away. In fact, the need for the car goes away, you would take a taxi (cheaper than owning a car) to trailheads. And yes, it is true that much of what I describe is simpler in those trails that are not in the deeper wilderness and thus encounter trailheads at roads every so often. Crossing the river probably doesn't need a full automated ferry -- even today that could just be a boat with a rope over the river, but at present nothing is there to pay to keep that there. A flying car might be a better way to get you over that river, especially if it's not that navigable as most of them aren't.

Some idle consideration of mine on heavy lift drones revolved around the use of a ducted fan - agility is of less interest than stability and efficiency :-) One nice thing that drops out of that is enough surface area to mount a large number of solar cells - certainly no good for inflight charging at a positive rate, but once it'd crash landed in a clearing ? Of course, there is a flaw - the consumer grade solar stuff I have access to has too much mass in for too little energy out - the more advanced experimental stuff looks interesting tho.