Maybe you shouldn't give a nice bag as your conference schwag

Like many, I go to a lot of conferences and events. And many of those events have decided that they should give everybody a bag. Most commonly it's a canvas laptop sized bag, though sometimes it's a backpack and at cheaper events just a tote. Some of the bags are cheap, some are quite nice. Some come with just the logo of the event on them, and others come festooned with many logos from sponsors who bought a space on the bag.

The bags are too nice to throw away, so I've kept most of them, usually tossing them in a storage crate. I decided to get the bags from the last decade out and lay them out for a photo. I'm guessing a lot of people have similar collections. We're undergoing a serious bag spam problem.

I don't see other people using these bags much either. Sometimes on the flight back from the conference. Or if the conference is an invite-only conference that has some cachet to its sachet. It's very rare to see people walking around with a bag with 6 sponsor logos on it. We conference-goers aren't the type that like to be seen as carrying around somebody's advertising, or being too cheap to buy our own briefcase. 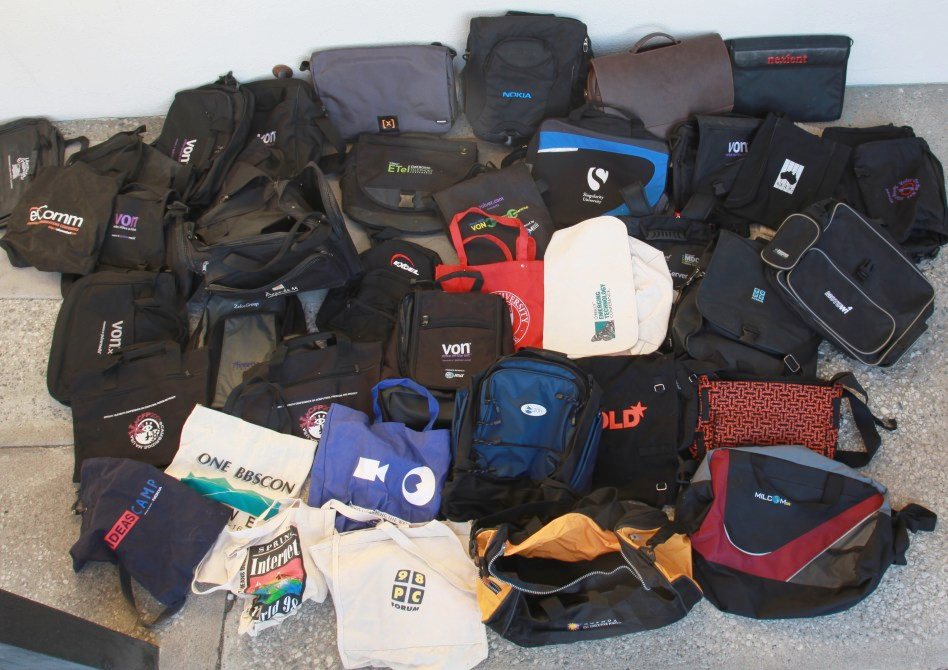 This isn't even the whole collection, there's 50% more out there. I have actually used a few bags if I happened to particularly like their design, or they came from places I actually worked at. Messenger bags which wear comfortably on the body seem to meet my approval over yet more laptop briefcases. And I have disposed of or given away a few, or they weren't in the crate I put bags into.

If you're getting ready to hand out a conference bag, here are some things to consider:

This is not to say you could not impress me with something clever, perhaps for a short time. For example I would not mind a bag that integrated a universal power supply and had retractable cords so I did not have to take it out. Or one of those new photographers sling backpacks that you can pull around to access stuff without removing the straps from your shoulder. But if you do that, soon somebody else will have it too and I'll have a box of them.

So what other schwag can you give out? That is a challenge of course, and there's a whole industry trying to sell you stuff. It varies with the time, and it has to be something new so that I don't have a box of them at home. Consumable stuff (chocolate bars etc.) are always welcome but you fear that this means your logo will be forgotten. But it's better than being in a crate. Travel stuff is usually a hit but duplication is again a risk -- retractable cables etc. Or spend your money on a nice mobile schedule for your event, one that doesn't suck (most of the ones out there suck) and put some logos on that.

I am told that homeless shelters like donations of backpacks and other useful bags. I suppose if we all did this, and companies found their logo hanging from the shoulders of homeless dudes, they might think twice about giving out so many bags. A system to arrange donation to poor folks in Africa might also be good.

How many are suitable for groceries?

I've never purchased reusable grocery bags. I've gotten enough suitable swag bags to meet my needs. If you go to a lot of conferences, you probably collected enough to supply your friends also.

As noted, laptop bags don't tend to do that well for groceries. Big open bags and tote bags are best for those. Bags that zip are handy though, for loose items. Some laptop bags have foam in them, which can provide some insulation.

give them to needy school kids

Or even college kids impoverished by $150 textbooks. CS students will get a kick out of the association with a potential future employer. OK, it's not the "My Little Pony" backpack that's essential for the preteen girl, but it carries stuff just as well. In my part of the country, there are a number of charitable organizations that will pick up a clothing donation from your door. Just package your donations in one of those backpacks every time they come by, and your collection will be depleted in no time.