Saturday saw the dedication of a new autonomous vehicle research center at Stanford, sponsored by Volkswagen. VW provided the hardware for Stanley and Junior, which came 1st and 2nd in the 2nd and 3rd Darpa Grand Challenges, and Junior was on display at the event, driving through the parking lot and along the Stanford streets, then parking itself to a cheering crowd. 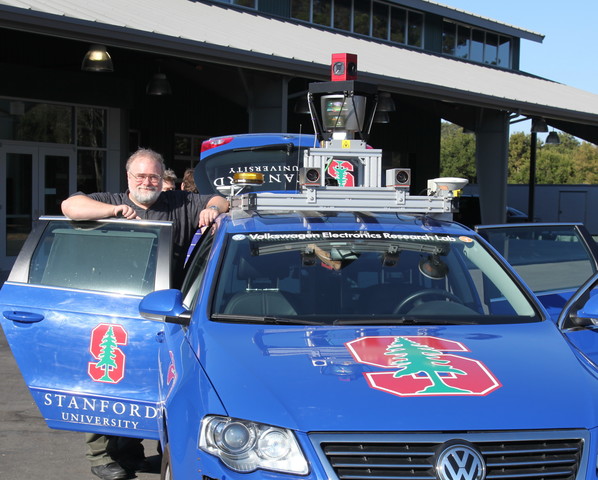 Junior continues to be a testing platform with its nice array of sensors and computers, though the driving it did on Saturday was largely done with the Velodyne LIDAR that spins on top of it, and an internal map of the geometry of the streets at Stanford.

New and interesting was a demonstration of the "Valet Parking" mode of a new test vehicle, for now just called Junior 3. What's interesting about J3 is that it is almost entirely stock. All that is added are two lower-cost LIDAR sensors on the rear fenders. It also has a camera at the rear-view mirror (which is stock in cars with night-assist mode) and a few radar sensors used in the fixed-distance cruise control system. J3 is otherwise a Passat. Well, the trunk is filled with computers, but there is no reason what it does could not be done with a hidden embedded computer.

What it does is valet park itself. This is an earlier than expected implementation of one of the steps I outlined in the roadmap to Robocars as robo-valet parking. J3 relies on the fact the "valet" lot is empty of everything but cars and pillars. Its sensors are not good enough to deal well with random civilians, so this technology would only work in an enclosed lot where only employees enter the lot if needed. To use it, the driver brings the car to an entrance marked by 4 spots on the ground the car can see. Then the driver leaves and the car takes over. In this case, it has a map of the garage in its computer, but it could also download that on arrival in a parking lot. Using the map, and just the odometer, it is able to cruise the lanes of the parking lot, looking for an empty spot, which it sees using the radar. (Big metal cars of course show clearly on the radar.) It then drives into the spot. 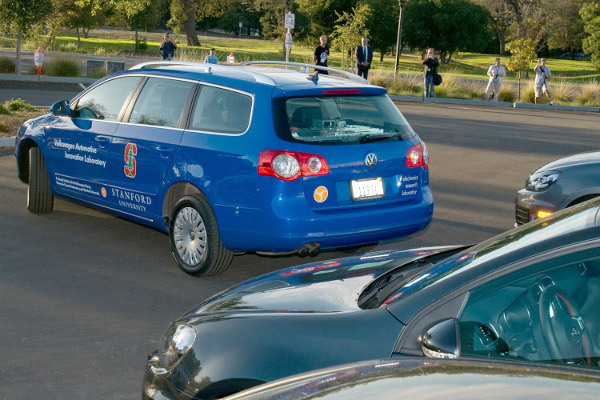 This isn't technology you could release today, but it's a big step along the path, and another sign of what small innovators can do given the hardware to play with. I forecast in the roadmap that, if there were some major parking lots supporting robo-valet, particularly one right at the airport terminal, and perhaps the driveways and garages of the rich, that early adopters might be happy to pay a chunk more to get a car able to do that. This design requires very little of the parking lot (other than no civilians being allowed) and not that much of the car. I also proposed a variant, where drive-by-wire cars have a protocol that lets the owner give over control of the car to a remote module that is stuck by magnets on the roof. This allows the car to participate with almost no extra cost (none if the car already has drive-by-wire and some sort of wireless data channel) and a reasonable cost for remote control modules to be paid by the parking lot.

Before deployment, I would want to bump the LIDAR ability to be able to look down and see people and curbs. Even with a closed parking lot, it would be better to be safe. That's no problem in a stick-on module, which can come with lots of sensors as it is able to be expensive. More LIDARs in the car make it more expensive, but they keep coming down in price.

The 3rd interesting announcement was of a modified Audi TT-S which is being programmed to be a racecar. In particular, they hope to race the car up to the top of Pikes Peak for the Pikes Peak International Hill Climb and beat the human record. That will raise some eyebrows.

In this picture, the vehicle does not have too many sensors on it. I suspect we'll see a larger sensor array before it does the race.

The robotic racecar will have some interesting consequences. Certainly in principle, a computer with perfect knowledge of physics and sensors giving complete data on tire traction and all other forces, should be able to race a car to its limits. And once the programmers have confidence in this knowledge, a computer can be completely fearless all the time. The only thing the computer won't be as good as is looking at the road to estimate its condition in real time -- however it might have very good knowledge of how much traction can be applied at spots all along the road by doing test runs when humidity is similar. They showed some video of the Audi zooming around what appeared to be my 2nd home, the Black Rock Desert, carving an Audi logo into the playa.

There are discussions in the works for man-vs-machine contests involving robocars and top human race car drivers. This would be exciting, though the number of crashes in regular racing may make it a bad idea at first.

The contest can go down in just a couple of ways. If the computer is programmed to be conservative, and never put a human driver at risk, it should be easy to beat. After all, it will always lose a game of chicken, and racing involves a lot of that. Unless the computer's command of physics is so great that it can win without being aggressive, which will make the contest boring.

On the other hand, a computer can be programmed never to lose a game of chicken. After all, it has no fear for itself (other than losing the race and costing the owner repair money.) And if the other drivers know the computer will always win the game of chicken because it can't die, they will become scared of it, and make it even easier for it to win the games of chicken. (The robot vs. robot challenges might be a bit more interesting.)

Of course, the robot has to know the human driver is playing such a game. The robot will calculate that the human driver can pull away safely, and push its way into spots, leaving it up for the human to get out of the way or risk a crash. The only thing the robot won't do is go somewhere that leaves the human driver no safe way out at all. As an olive branch, the robot racecar, not needing to protect its occupant, might be designed so that it protects the occupant of the other car in a crash.

For a while, the robots might be programmed somewhere in the middle. Indeed, we might put rules on the robots to make the contest more fair, and more interesting. If you make the robots entirely predictable, however, that makes them easier to beat unless they are reliably fearless. You might add a bit of randomness to it as to just how fearless they will be. This is not just an arbitrary addition, since the robot does have reasons to fear a crash, since a crash means probably losing the race.

Update: It was suggested to me that from time to time, human drivers try to play the fearless game, never yielding, driving very aggressively. When they do that, the other drivers often decide to gang up on them, and force them off the track, even making them crash, until they learn to do a bit of give and take. It may be that robot racecars will have to do the same thing. In game theory, it is well established that cooperative strategies often lead to victory against those who never cooperate, even in highly competitive single-winner contests.

The Pikes Peak race is a time trial however, so these issues do not bear on it.

(Photo credits: Top image of Junior 3 - Volkswagen. Others are mine.)