Some time ago I proposed the "School of Fish Test" as a sort of turing test for robocars. In addition to being a test for the cars, it is also intended to be a way to demonstrate to the public when the vehicles have reached a certain level of safety. (In the test, a swarm of robocars moves ona track, and a skeptic in a sportscar is unable to hit one no matter what they do, like a diver trying to touch fish when swimming through a school.) 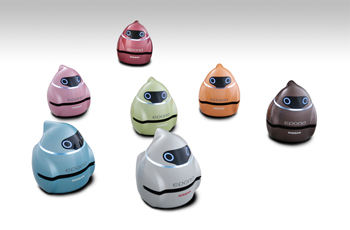 I was interested to read this month that Nissan has built test cars based on fish-derived algorithms as part of a series of experiments based on observing how animals swarm. (I presume this is coincidental, and the Nissan team did not know of my proposed test.)

The Nissan work (building on earlier work on bees) is based upon a swarm of robots which cooperate. The biggest test involves combining cooperating robots, non-cooperating robots and (mostly non-cooperating) human drivers, cyclists and pedestrians. Since the first robocars on the road will be alone, it is necessary to develop fully safe systems that do not depend on any cooperation with other cars. It can of course be useful to communicate with other cars, determine how much you trust them, and then cooperate with them, but this is something that can only be exploited later rather than sooner. In particular, while many people propose to me that building convoys of cars which draft one another is a good initial application of robotics (and indeed you can already get cars with cruise control that follows at a fixed distance) the problem is not just one of critical mass. A safety failure among cooperating cars runs the risk of causing a multi-car collision, with possible multiple injured parties, and this is a risk that should not be taken in early deployments of the technology.

My talk at the Singularity Summit on robocars was quite well received. Many were glad to see a talk on more near-future modest AI after a number of talks on full human level AI, while others wanted only the latter. A few questions raised some interesting issues:

As expected, the New York audience, unlike other U.S. audiences, saw no problem with giving up driving. Everywhere else I go, people swear that Americans love their cars and love driving and will never give it up. While some do feel that way, it's obviously not a permanent condition.

Some other (non-transportation) observations from Singularity Summit are forthcoming.

BTW, I will be giving a Robocar talk next Wednesday, Oct 28 at Stanford University for the ME302 - Future of the Automobile class. (This is open to the general Stanford community, affiliates of their CARS institute, and a small number of the public. You can email btm@templetons.com if you would like to go.)

It's great to see Nissan is going this way. I think that whether people like it or not (eventually, everyone will), this IS the future of human transportation. I also wholeheartedly am on board with your proposed "School of Fish" Turing-style test for robotic vehicles; should one be able to pass, it would be extremely difficult for even the most die-hard anti-progress advocates to call it unsafe. Your talk at the Singularity Summit was excellent Brad, and I think it not only made people realize the amount of progress that we have already made with robotic cars, but also (and more importantly) it got them excited about the prospect of no longer having to drive.

Oh and just in case you weren't sure, all of us backstage were cracking up at your response to the insurance industry question as well.