No, Detroit is not winning the robocar race.

A new report from Navigant Research includes the chart shown below, ranking various teams on the race to robocar deployment. It's causing lots of press headlines about how Ford is the top company and companies like Google and Uber are far behind.

I elected not to buy the $3800 report, but based on the summary I believe their conclusions are ill founded to say the least.

This ordering smacks of old-world car industry thinking. Saying that Ford and GM are ahead of Waymo/Google is like saying that Foxconn is ahead of Google or Apple in the smartphone market. Foxconn makes the iPhone of course, and makes lots of money at a modest profit margin of a few percent. Apple and Google don't make their phones, they design them and the software platform.

Ford and GM might feel good reading this report, but they should not. I do actually like Ford's plan quite a bit -- especially their declaration that they will not sell their robocar to end-users. I also like Daimler's declaration that they want to have a taxi style service called "Car2Come" after their Car2Go one-way on-demand car rental service. (Americans giggle at the name, Germans are never bothered by such things. :-) 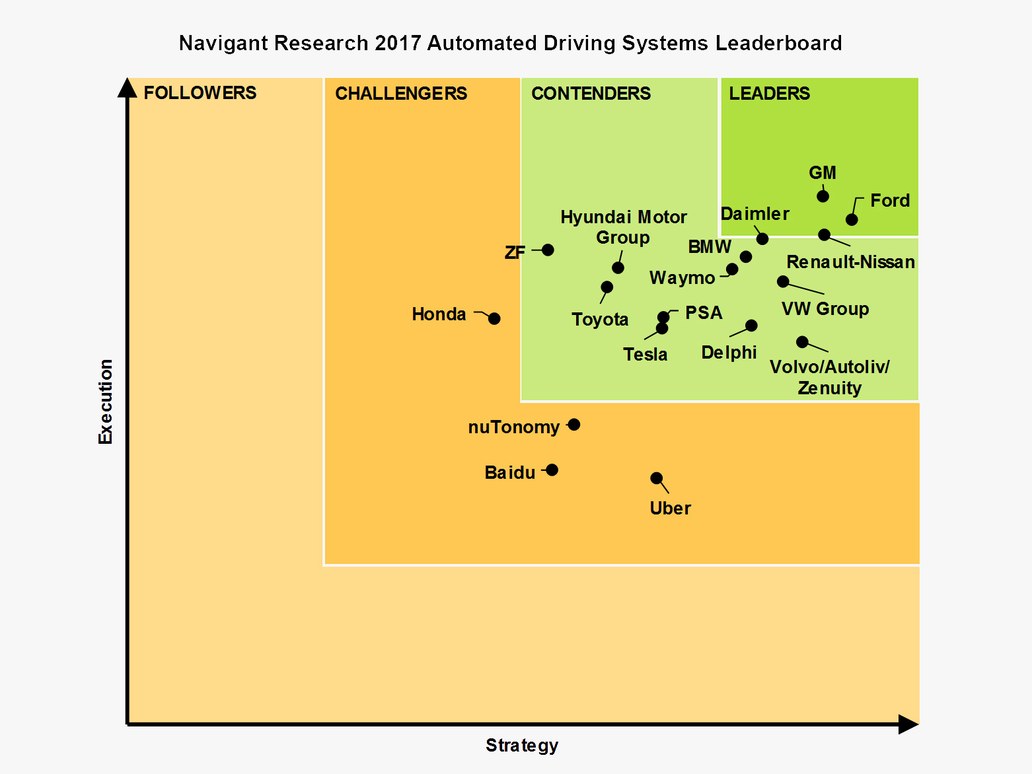 GM does not belong high on the list, other than for its partnership with Lyft. They were wise to acquire a company like Cruise -- and I know the folks at Cruise, this is not a criticism of them -- but it's not enough to catapult you to the front of the list.

A similar article came out a few months ago, declaring that Silicon Valley was sure to lose to Detroit, because Detroit knows how to make cars, and Silicon Valley doesn't. The report went further and declared that Google was falling behind because they had said they did not plan to make a car. The author had mistakenly thought Google had plans to make a car -- Google never said anything like that -- and so decided that the announcement that they would not make one was a big retreat on their part.

Companies like Google, Apple and Uber have never stated they wished to make cars, or felt they were any good at it. If they want to make cars, they have the cash to go buy a car company, but there is no need to do that. There are a couple of dozen companies around the world who are already very good at making cars, and if you come to them with an order for 100,000 cars to your specification, they will jump to say "yes, sir!" Some of the companies, the big leaders like Toyota or BMW, might well refuse that order, not wanting to be the supplier for a threat to their existence. But it won't help them. Somebody will be that supplier. If not a German, Japanese or U.S. company, then a Korean company, or failing that a Chinese company. In fact, Foxconn has said it is interested in making cars, and Apple is designing them, so the Apple-Foxconn relationship may be far more than a metaphor for this situation.

The winner of the transportation game of the future will be the company that thinks outside the car. That doesn't mean the big car companies can't do that. It's just harder for them to do.

The chart's not entirely wrong. Honda is pretty far behind -- but PSA is even further behind. BMW, Daimler and Ford are among the best of the car companies, but Tesla and Volvo deserve higher ranking. Hyundai is not ahead of Toyota, and Tesla, while not ahead of Waymo, is in a pretty good place. Bosch is a surprising absentee from the list. FCA should be on it, just very low on the chart, along with the smaller Japanese vendors and many Chinese vendors.

But be clear. Making the car is essential, but it's also old and a commodity. The value will lie in those building the self-driving software systems and sensors, and those putting services together around the technologies. The big automaker's advantages -- nameplate and reputation, reliability, manufacturing skill and capacity, retail channel experience -- these are all less valuable or commoditized. They have to act fast to move to new business models that will make it in the future. Of course, one plan is to own the important components I name above, and several companies like BMW, Daimler, Ford, Nissan and Volvo are trying to do that. But they're behind Waymo by a fair distance.

My bet is Tesla is leading the race

Because autonomous driving is based on machine learning algorithms (similar to algorithms that use Google for the search engine) and provided the most data you have, the better result you get from those algorithms, a company that delivers 100K cars/year (soon 300K) with all hardware for autonomous driving capable to work in shadow mode gathering data from all his costumers around the world will soon overpass all the competition by large. That company is Tesla.

I no doubt Waymo will be the best autonomous car in Palo Alto roads, but world is much more diverse and to learn all possible scenarios you need hundreds of thousands cars, not just hundreds.

But if you go around the industry and ask the question, "Which company is the clear leader in machine learning and neural network technologies?" The answer will almost universally be "Google."

So do you really imagine that Tesla would be so far ahead of Waymo on that? That Waymo, even though recently put into its own company, has not made use of that skill? Why would they not?

If you rephrase the question as "Which company is likely to profit the most from automated transportation in the next ~15 years?

I would respond : Amazon

Will indeed profit nicely, but it's small compared to personal transportation.

Delivery services around the world are a few hundred billion dollars. Personal transport is 5 trillion.

OEMs are the wrong segment to examine

The popular press always ranks automakers since the public knows their names and will buy the reports. In automotive ecosystem, this is wrong thinking. The companies that are really developing the technology are not just the Sili Valley favorites, but also Tier 1's and Tier 2's like Continental, Bosch (as you astutely point out) and Nvidia. Both Tesla and Audi run Nvidia's Tegra, making me wonder how different their systems really are. comma.ai also ran with the Nvidia Jetson board. BMW has partnered with Intel and Mobileye. Perhaps if the autonomy gold rush falters, Conti, Bosch, Harman, Nvidia and Intel will profit most.

Nvidia as a base

Nvidia GPUs are, from this viewpoint, general purpose massively multicore processors. It's all in the software, so there does not have to be any similarity in how Tesla and Audi and comma.ai use them. Now they are all doing neural networks with them but that's again a platform rather than an algorithm.

Tier Ones are working on it, but OEMs are scared of not owning what may become the more important tech in the car.