Recently I did a road trip through Portugal. I always enjoy finding something new that they are doing in a country which has not yet spread to the rest of the world.

Along a number of Portuguese roads, you will see a sign marked "velocidade controlada" -- speed control -- and then a modest distance down the road will be a traffic light in the middle of nowhere. There is no cross street. This is an interesting alternative to the speed bump or other "traffic calming" systems.

At the sign a radar gun measures your speed. If you are over the limit, then as you approach the light, it turns red. It turns red for you, and also anybody behind you and the oncoming traffic.

The result is people slow down for these signs to the limit. Far more effectively than any speed bump, and without the very annoying bump. Mostly this is done on faster roads than the quiet residential streets that have speed bumps, and of course traffic lights cost more than speed bumps, at least today. 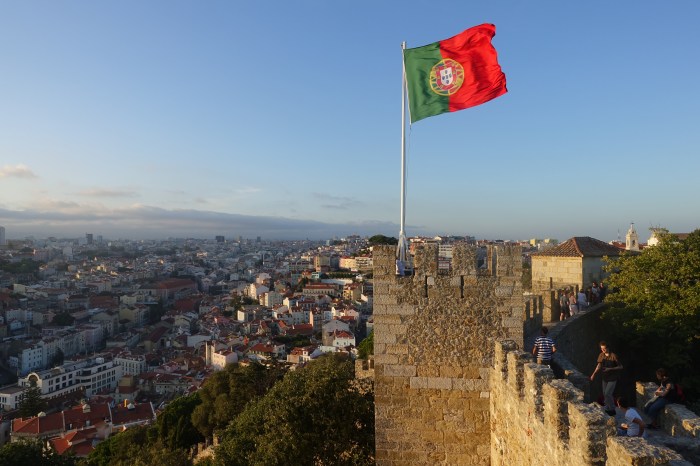 The social dynamic is interesting. Even though many of us are scofflaws when it comes to the speed limit, most are much more religious about a red light. Even a red light like this one where there is no physical danger to running the red light, just the fairly unlikely risk of a stronger ticket. Strangely, though both speeding and running this light are both just violations of the law, I never saw anybody run one, and drivers who were total speed demons elsewhere quickly slowed down before these signs. (People know where they are, so they aren't a general speed reducer, but rather more like a speed bump in cutting speed in one particular place.)

Added to this is the element of public shame. If you trigger this light, you stop everybody around you too. If you're a sociopath, this won't concern you, but for most there is a deep shame about it.

Today, as noted, a traffic light and radar gun are a moderately expensive thing. These lights are not nearly as expensive because they don't require the complex intersection survey and programming of sometimes 20-30 real lights, but they still need a pole, and electricity, and weather hardened gear. In the future, I predict this sort of tech will get quite inexpensive, possibly cheaper than a speed bump. You could imagine making one with solar power and LEDs which only displayed the red light, not the green, and so needed no external power for it. They need not be on all the time -- in fact if the batteries got low, they could just shut down until they recharged. The radar and communications link could also become quite cheap.

Of course, I would like to see this combined with more reasonable speed limits. I have pointed out before that the French Autoroute approach of a realistic limit of 130km/h that everybody obeys and where you really get tickets if you exceed it is much better than the US approach of a 65mph limit that 90% of drivers disregard. This system is much better than the speed bump. Speed bumps hurt cars and impede emergency vehicles. Emergency vehicles can blow through these. These could even vary their speed based on conditions and time of day.

Robocars of course would know where all these are and never trigger one, even if the occupants have commanded the vehicle to exceed the limit. But this is mostly a technology for human drivers. It is halfway along the path to "virtual infrastructure," which is how roads and traffic control will work in the future when every car, human driven or not, uses a maps and data over phones to know the road, rather than signs and lights.

You are correct, crossing a red light leads to a much more sever punishment than going over certain speed limits. To be more clear, for example, these are the breakdowns:
Speed limit excess in local (residential) areas:
- up to 20km/h: minor infraction
- up to 40km/h: moderate infraction
- up to 60km/h: severe infraction
- 60km/h or more: crime

You see the pattern. For "non residential" areas the same pattern applies, but at 30km/h intervals.
Crossing a red light is always a severe infraction.

So a person that easily drives at 70 or 90km/h at a residential area with 50km/h is still incurring in a lighter infraction than crossing a red light. And 90km/h is a speed that many residential areas "entice" us to drive at, but still very dangerous to anyone wanting to cross the street.

At the moment I am in Brazil, and I have already rented a car here. The system here, although much much more expensive than in Portugal, is undoubtedly more effective. Basically there are speed traps literally everywhere, and they are not really concealed, people know they are there. I drove from São Paulo to Rio de Janeiro and within two weeks I had received a fine, for doing 50km/h in a 40 zone. The authorities add an error, as they also do in Portugal, and they only really considered I was doing 43.

The system is very effective, although presumably very costly. The main issue for me here is that the speed varies greatly along trips, and you really have to pay attention to the speed limits. In Portugal I think they are more "predictable".

Hi, Spain here. We have been

Spain here. We have been doing this for years also :-)

Where do they have them?

I have not seen them driving in Spain

I proposed exactly this methodology for our small California town, on a four-lane street that invariably had a couple of crashes per month, due to speeds over 30 mph. I was stunned...stunned... by a city councilman's response: "Put in additional traffic lights??!! Are you kidding? Do you realize, traffic lights cost $500,000 each?"

The solution was to narrow the four lanes to two lanes, add bike lanes, and put left-turn lanes between opposing traffic. Not the best, but it sorta works. Accidents are down.

No one wants the correct system approach, which would be "broadcast drivers license". To drive a car, you would have to insert your driver's license into a card reader, which would in turn, broadcast your individual information. Pass a receiver while going too fast? Instant ticket, received in the mail. License revoked due to drunk driving? Don't borrow someone else's license. The lender would potentially lose theirs, two years to lifetime, for "lending" their license. Cars can be licensed, but you don't need a license plate...why bother? It's the driver that matters. High speed chase? Not any more. Pretty easy to learn who the driver is...not "getting away", unless they abandon everything they have at home.

Driving is a privilege but some people treat it like their own (NASCAR) "freedom". 'Freedom of the Road' sounds romantic, but the reality is, it doesn't exist. Might as well have 'broadcast drivers licenses' and rein in the idiots.

People oppose that, correctly, because it's Orwellian. That's what is interesting about the system from Portugal. No surveillance or identity involved.

Indeed, modern traffic lights cost a lot ($500K is an overestimate, and the high numbers are for very complex lights at intersections where you can have as many as a score or more of individual light units when you factor in the multiple lanes, left-turn lights, low and high lights, lights per lane, pedestrian lights and more, plus tearing up the road for sensors, and power etc.

The Controlada is a simple pair of lights, possibly on the same pole, and some radar sensors, and some power. In theory it could be built with solar power. It's vastly less expensive, but still several thousand. But I can see it competing with a speed bump using modern tech.