A follow-up thought about yesterday's shuttle fly-by and panorama. I was musing, might this be perhaps the most photographed single thing in human history to date?

Here's the reasoning. Today there are more cameras and more photographers than ever, and people use them all the time in a way that continues to grow. To be a candidate for a most-photographed event, you would need to be recent, and you would need to take place in front of a ton of people, ideally with notice. It seemed like just about everybody in Sacramento, the Bay Area and LA was out for this and holding up a phone or camera.

Of course, many objects are more photographed, like the Golden Gate Bridge the shuttle flew over, but I'm talking here of the event rather than the object. Of course this is an event which moved over the course of thousands of miles. 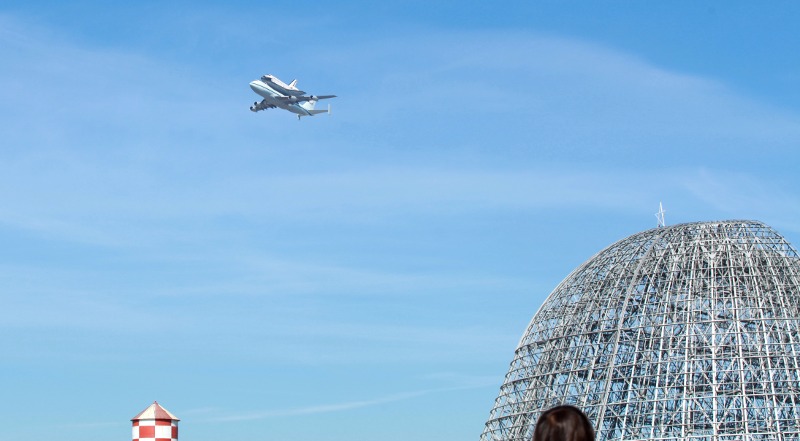 Prior to the digital era, a possible winner might be the moon landing. Back in 1969, every family had a camera, though usage wasn't nearly what it is today. However, I remember the TV giving lessons on how to photograph a TV screen. Everybody was shooting their TV for the launches and the walk on the moon. Terrible pictures (much like early camera phone pictures) but people took them to be a part of the event. I recall taking one myself though I have no idea where it is.

Of course there may be objective ways to measure this today, by tracking the number of photos on photo sharing and social sites, and extrapolating the winner. If the shuttle is the winner for now, it won't last long. Photography is going to grow even more.

I should also note that remote photography, like we did for Apollo, is clearly much larger, in the form of recording video. For those giant events viewed by billions -- World Cup, Olympics, Oscars etc. -- huge numbers of people are recording them, at least temporarily.

Not just the most-photographed, but also the smallest photo-to-print ratio, because you don't need to "develop" the film in order to view the recorded image anymore.

Up until we bought a special printer just for the purpose, I don't think there was a single "hardcopy" image of my niece in existence.