Last night, one day early, I attended Stanford's unveiling of their newest research vehicle for self-driving. In order to do experiments with drifting (where you let the rear wheels skid freely) they heavily modified an old Delorean.

They managed to get Jamie Hyneman of Mythbusters to host the event so there was a good crowd. He asked "Why a Delorean?" and instead of saying the obvious line:

"The way I see it, if you're going to build a self-driving drifting car, why not do it with some style?"

They got into the actual technical reasons for it, even though they called the car Marty and were revealing it one day before "Back to the Future Day" -- the day in the 2nd movie where Marty travels to in the future, Oct 21, 2015.

Back to the present, this car, with rear wheel drive and central engine mount is not a great car to drive, and they removed the engine and replaced it with dual electric motors from Renovo. This creates a car able to drive the two rear wheels independently. This offers the ability for the software to spin the wheels at different rates, and do things that no human driver could ever do, including special types of drifting. They already have managed to get the car to turn tighter doughnuts (circles) than a human could. 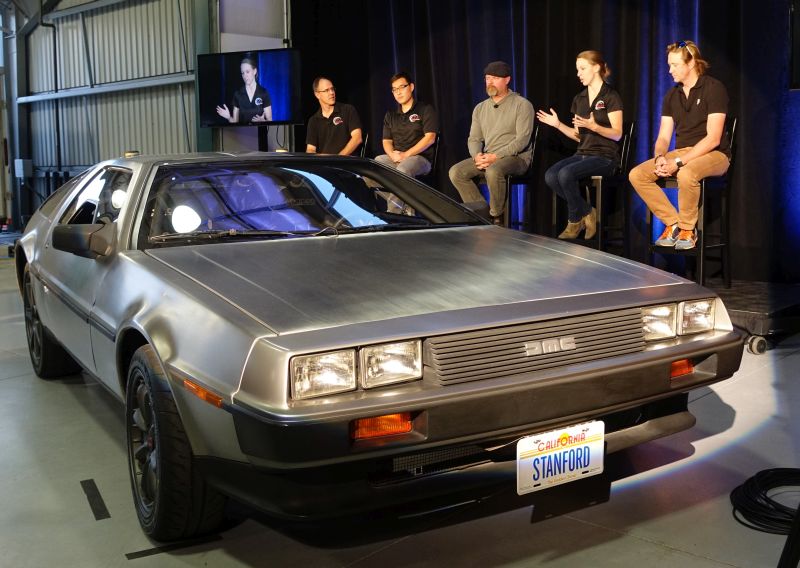 Drifting is usually done for show -- it rarely will help you in a race. Hyneman actually showed that in one of the episodes of his show. Stanford's team wants to answer whether the robot's ability to do inhuman driving might offer more "outs" in a dangerous situation, like trying to avoid a collision. Might a car twist its wheels (perhaps some day all of its wheels) and spin them at different speeds to make the car take a path which could avoid an accident.

In effect, you would be trying to make a car that can drive like a Hollywood stunt car. In movies, stunt drivers often do fairly improbable and impossible moves with cars to avoid accidents. A classic Hollywood scene involves a car titling up in two wheels to get through a tiny gap it could not drive through. (The Stanford team did not propose this, and it's a pretty hard thing to do, but it's one way to envision the general idea.)

Up to now, research on accident avoidance has been fairly low-key. After all, the main task is to drive safely in the lane you are supposed to drive in. That's plenty of work and the result of almost all of the focus. Eventually, teams will focus on what to do when things go wrong, but for now the prime priority is to make sure things don't go wrong. Someday, they may even focus on the infamous trolley problem.

Normally, drifting is a bad idea. It means a loss of control and a loss of power. Normally, the connection of the tires and the road is the sole tool you have to drive and control a car. You would only give it up if you absolutely have to. Perhaps, the research will show, there are times you might want to.

Generally, drift or not, robots should become very good at avoiding accidents. They will know the physics of the tires perfectly, and they will calculate without panic, and will be able to drive with full confidence missing things by very thin margins while staying safe. While a human could not navigate a space only a few inches wider than the car with confidence, a robot could. A robot will always use the optimal combination of steering and braking, which humans need a lot of training to do. (Your tires can give you braking force or steering force but you must reduce one to get more of the other, so often the best strategy is to brake first and then steer, though the human instinct is to do both.)

The car is not super autonomous. It is meant to do test algorithms on private open spaces. It won't be avoiding obstacles or plotting lanes on a highway. It will be testing how well a computer can get the most from the tires.