Warner Brothers and Intel experiment with in-robocar entertainment. Is that a good idea?

Intel and Warner made a splash at the LA Auto Show announcing how Warner will develop entertainment for viewing while riding in robotaxis. It's not just movies to watch, their hope is to produce something more like an amusement park ride to keep you engaged on your journey.

Like most partnership announcements around robocars, this one is mainly there for PR since they haven't built anything yet. The idea is both interesting and hype.

I'll start with the negative. I think people will carry their entertainment with them in their pockets, and not want it from their cars. Why would I want a different music system with a different interface when my own music and videos are already curated by me and stored in my phone? All I really want is a speaker and screen to display them on.

This is becoming very clear on planes, where I prefer to watch movies I have pre-downloaded on my phone than what is on the bigger screen of the in-flight entertainment system. There are several reasons for that:

So Warner is wise in putting a focus on doing something you can't do with your personal gear, such as a VR experience, or immersive screens around the car. There is a unique opportunity to tune the VR experience to the actual motions of the car. In traffic, you can only tune to the needed motions. On the open road, you might actually be able to program a trip that deliberately slows or speeds up or turns when nobody else is around to make a cool VR experience.

While that might be nice, it would be mostly a gimmick, more like a ride you try once. I don't think people will want to go everywhere in the batmobile. As such it will be more of a niche, or marketing trick. 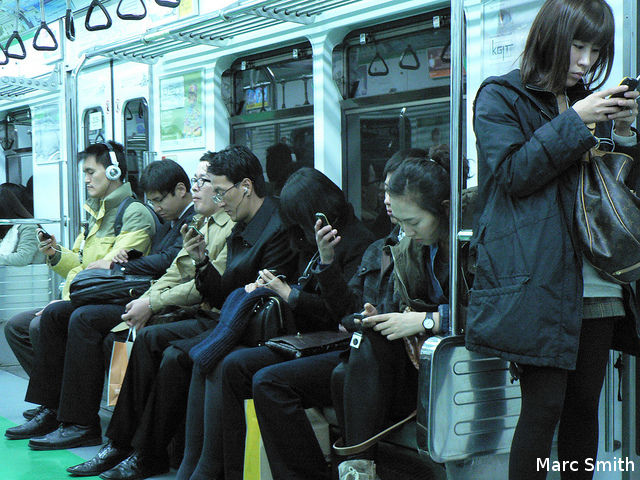 More interesting is the ability to reduce carsickness with audio-visual techniques. Some people get pretty queasy if they look down for a long time at a book or laptop. Others are less bothered. A phone held in the hand seems to be easier to use for most than something heavier, perhaps because it moves with the motion of the car. For many years I have proposed that cars communicate their upcoming plans with subtle audio or visual cues so that people know when they are about to turn or slow down. Some experiments are now being reported on this and it will be interesting to see the results.

If you ride on a subway, bus or commuter train today, the scene is now always the same. A row of people, all staring at their phones.

Some commenters have speculated that another goal here may be to present advertising to hapless taxi passengers. After all, ride a New York cab and many others and you will see an annoying video loop playing. Each time you have to go through the menus to mute the volume. With hailed taxis, you can't shop, and so they can also get away with doing this -- what are you going to do, get out of the cab and wait for the next one?

I hope that with mobile-phone hail, competition prevents this sort of attempt to monetize the time of the customer. I definitely want my peace and quiet, and the revenue from the advertising -- typically well under a dollar an hour -- can't possibly offset that for me.

Last week I reported on a proposed bill to limit liability for robocar vendors. The bill failed.

> I mean it's amazing how bad most of them are. (Turns out there is a reason for that.)

What's the reason? It's clear that a bunch of them based upon WinCE simply haven't got the CPU to actually be responsive, or get the touch screen interface well. But that's just poor engineering... You are suggesting that this level of incompetence is intentional?

All features of an aircraft must get safety tested. They need to know what happens if you smash your head on the back of the seat in front of you in a crash. This is expensive, so they don't like to do it very often, which means they don't upgrade the IFE system very often, perhaps every 10 years, unlike your phone which you update every 2 years.

Some airlines are just putting a holder on the seat back and inserting the tablet of the day into it, so they can update more often. But still, on a lot of planes you have an ancient computer running in a giant box taking up room under the seat driving a VGA screen.

"For many years I have proposed that cars communicate their upcoming plans with subtle audio or visual cues so that people know when they are about to turn or slow down. Some experiments are now being reported on this and it will be interesting to see the results."

And we ought to meet the cars, at least half way: http://www.iotjournal.com/articles/view?16661