Will you need geeky glasses to avoid motion sickness in your robocar? 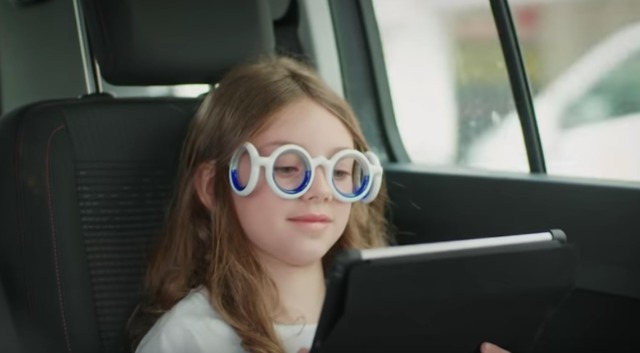 For a lot of people, being a passenger in a car can easily lead to motion sickness, particularly if they try to do something like looking down to read a book or stare at a phone. Not everybody gets this, but it's enough to be a big issue for the robocar world. Drivers usually don't feel this much, but in the robocar world, everybody's a passenger.

Motion sickness generally results when your eyes and inner ear (balance) tell you different things. Looking down at your book, your eyes see it and the interior of the car not moving, but your motion sensors remind you that you really are. Looking out at the horizon puts your eyes and balance in agreement, and makes it better, but on a winding road, even that can be not enough.

Of course it happens on ships due to the waves and rarely on trains which make few turns and don't bounce much.

I've been pondering this for a while, and recently came upon an interesting effort from a team at French automaker Citroën. They gave people some very geeky looking glasses with circular liquid "levels" both in front, and to the sides. These make an artificial horizon in two dimensions, no matter where you are looking. They claim it reduces motion sickness. Similar glasses have been used at sea for some time.

While they have to make them look better, the idea is an interesting one, and those who really suffer from this may not mind looking uncool, especially in a solo car.

Here are some other thoughts I have had over the years on addressing this problem:

Bank the car and the seats

A robocar might be made with a passenger compartment -- or just a passenger seat -- mounted on hydraulic actuators like a simulator pod. This would allow the vehicle to tilt the passenger left or right, or forward or backward, depending on how much the car is turning or accelerating. Done right, you could tilt the passenger so that the "net force" is always only up or down from their perspective. In other words, they would never feel the car tilt, accelerate or brake, they would only feel themselves get lighter or heavier, like you do in an elevator. Done perfectly, a ball placed on the seat would not roll during any of these turns.

Because a robocar knows the geometry of all planned turns perfectly, it could make this adjustment. This might combine with a vehicle that has independent wheel suspension so the whole vehicle is able to "lean" in turns, as a motorcycle does. In fact, if you want a narrow stance vehicle for single people, there is no choice but to lean in order to maintain stability.

Moving the whole passenger cabin is hard, it would be better if you just had to tilt the seat. You would need to make sure nobody could get their hand under the seat.

This would definitely be valuable in places where roundabouts are common, like much of Europe. Driving at high speed through roundabout after roundabout could make anybody sick. And robocars will be great at roundabouts, always judging their merge perfect and thus rarely slowing down much except when they are fairly busy.

Again, the car knows how it plans to turn. It can also know about upcoming bumps in the road and some of the need for braking. I would like to experiment with making a quiet background noise -- perhaps so quiet you are not consciously aware of it. In spite of this, the noise would make subtle changes in tone when there are upcoming or current accelerations. This might be able to train the brain to get a different channel of information (through the inner and outer ear rather than the middle.) More likely, it could provide an unconscious signal that "it's time to look up now" so people pause in their reading before the turn.

Screens on the walls or floor

I've seen concept cars with screens all over the doors. I don't think people will want those for working, but you could but in screens to make parts of the body seemingly transparent, or simply provide an artificial horizon like these glasses. The ability to see that while staring at your device could help.

At a far simpler level than a banking passenger compartment, a robocar doesn't need the tight, driver-oriented suspension that lets you feel the road. You don't want to feel the road. This allows a super-soft suspension. In fact, you can have a suspension that responds perfectly to road bumps, potholes and other problems because it knows they are there, either from the map or from the laser scanner which measured the geometry of the road. Some cars already have some of this functionality. In the future, it might be possible to drive a washboard dirt road and barely feel the bumps. That should also help with motion sickness.

People may want to play VR games or do other VR in the car, but that's a sure path to motion sickness for some. If the car provides a feed of planned turns and other info to the VR system, it could make the virtual world bounce and turn and adjust as the real one does, and possibly make it much more pleasant.

The simplest thing of all will be placement of the screen for watching movies up high, with windows behind it. For a long time, the backseat passengers have had video screens in the headrests, though this is now supplanted by everybody having their own tablet back there for games and video. This is, of course, not allowed in the front seat, but that will change. Perhaps you can't read a book but you'll probably be able to enjoy a video.

What ideas do you have for helping people not get queasy in a bouncing car?

I also really like the idea of subtle audio cues to give you a chance to look outside before the car begins to turn. I was quite susceptible to motion sickness when I was young, today it's better though. In my experience keeping your eyes on the landscape outside of the car is what helps the most, so making sure each passenger has a nice view is probably key. However the driver might be the most important factor. When driving with someone who isn't steady on the wheel and gas/brake I get motion sickness almost immediately, but when riding with experienced and calm drivers I can even do some light reading. Programming the cars to prioritise a smooth and calm ride might be enough for most people.

I'm curious about why these Citroën glasses have been in the news as an invention. This writer claims that these "boarding ring" glasses have been around for over a decade: http://www.oldsaltblog.com/2017/04/anti-sea-sickness-glasses/

They did not invent the concept, just applied it to driving.