Last week, I attended a talk by Marc Raibert the former MIT Professor who founded Boston Dynamics, the makers of the BigDog 4-legged walking robot. If you haven't seen the various videos of BigDog you should watch them immediately, as this is some of the most interesting work in robotics today. 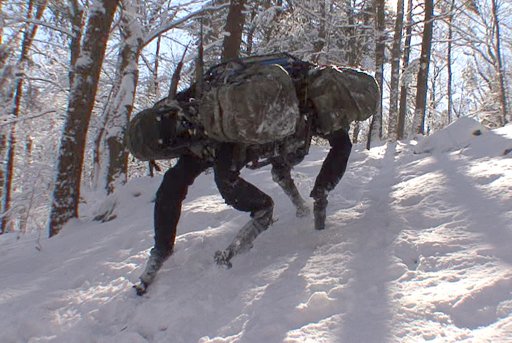 Walking pack robots like BigDog have a number of obvious applications, but at present they are rather inefficient. BigDog is powered by a a 2 stroke compressor that drives hydraulics. That works well because the legs don't need engines but can exert a lot of force. However, its efficiency is in the range of 2 gallons per mile, though this is just a prototype level. It is more efficient on flat terrain and pavement, but of course wheels are vastly more efficient there. As efficient as animals are, wheeled vehicles are better if you don't make them heavy as tanks and SUVs.

BigDog walks autonomously but today is steered by a human, or in newer versions, can follow a human walking down a trail, walking where she walked. In the future they want to make an autonomous delivery robot that can be told to take supplies to troops in the field, or carry home a wounded soldier.

I wondered if BigDog isn't trying too hard to be a mule, carrying all the weight up high. This makes it harder for it to do its job. If it could just tow a sledge (perhaps a container with a round teflon bottom with some low profile or retractable wheels) it might be able to haul more weight. Particularly because it could pay out line while negotiating something particularly tricky and then once stable again, reel in the line. This would not work if you had to go through boulders that might catch the trailer but for many forms of terrain it would be fine. Indeed, Boston Dynamics wants to see if this can work. On the other hand, they did not accept my suggestion that they put red dye in the hydraulic fluid so that it spurts red blood if damaged or shot.

The hydraulic design of BigDog made me wonder about applications to robocars. In particular, it seems as though it will be possible to build a light robocar that has legs folded up under the chassis. When the robocar got to the edge of the road, it could put down the legs and be able to climb stairs, go over curbs, and even go down dirt paths and rough terrain. At least a lightweight single person robocar or deliverbot might do this. Navigation might be tricky on some types of terrain, though if a human is inside they can deal with that. Deliverbots and empty vehicle deliveries would either have to self-navigate or rely on a remote tele-operator to do the navigation over these short stretches.

The ability to walk could be game-changing because of what it means to the "last mile" problem. Walking robocars could change things so that the last mile doesn't have to be a road at all, and certainly doesn't have to be paved. Earlier I mused about how we could make much cheaper last mile residential streets thanks to robocars, but cars able to walk that last little distance could mean we don't have to have a road at all.

This also means houses that are on hillsides could be reached by cars and deliveries, all with no infrastructure. And of course it would be prized by the disabled and the aged. The walking section need not be very efficient nor even very smooth and comfortable. For safety reasons, when a human is being carried, it could require human supervision.

The robocar will already have motors in it. Those motors, for little added weight, could run a compressor to power hydraulics in the fold-down legs. However, it certainly will add some weight so it's not something you would see on every car, and in fact larger cars probably would not have it at all.

When it comes to safety, there is a risk that a walking robot could fall. If it's empty, that's not a big deal, it just damages the robot. When a person is inside, human guidance to stay away from truly risky surfaces could be used. The non-disabled may just decide to get out and walk. Still, vehicles with airbags and seatbelts can probably protect a person in a short fall.

Interesting post and concept of the "walking cars". Thanks for sharing. Wondering if Boston Dynamics took this idea into consideration?