Can we test robocars the way we tested regular cars?

I've written a few times that perhaps the biggest unsolved problem in robocars is how to know we have made them safe enough. While most people think of that in terms of government certification, the truth is that the teams building the cars are very focused on this, and know more about it than any regulator, but they still don't know enough. The challenge is going to be convincing your board of directors that the car is safe enough to release, for if it is not, it could ruin the company that releases it, at least if it's a big company with a reputation.

We don't even have a good definition of what "safe enough" is though most people are roughly taking that as "a safety record superior to the average human." Some think it should be much more, few think it should be less. Tesla, now with the backing of the NTSB, has noted that their autopilot system -- combined with a mix of mostly attentive but some inattentive humans, may have a record superior to the average human, for example, even though with the inattentive humans it is worse.

Last week I attended a conference in Stuttgart devoted to robocar safety testing, part of a larger auto show including an auto testing show. It was interesting to see the main auto testing show -- scores of expensive and specialized machines and tools that subject cars to wear and tear, slamming doors thousands of times, baking the surfaces, rattling and vibrating everything. And testing the electronics, too.

In Europe, the focus of testing is very strongly on making sure you are compliant with standards and regulations. That's true in the USA but not quite as much. It was in Europe some time ago that I learned the word "homologation" which names this process. 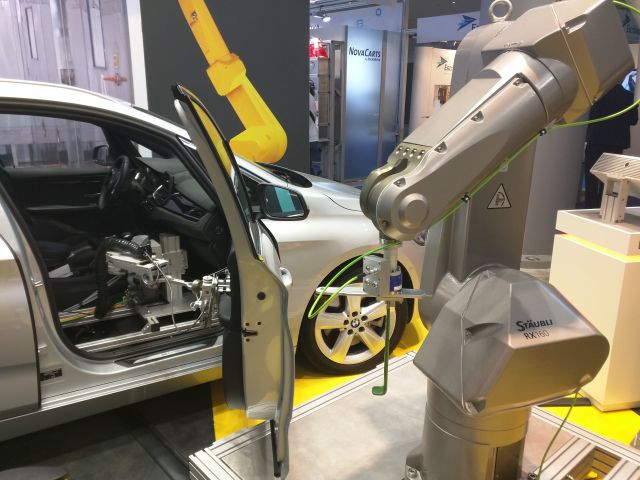 There is a lot to be learned from the previous regimes of testing. They have built a lot of tools and learned techniques. But robocars are different beasts, and will fail in different ways. They will definitely not fail the way human drivers do, where usually small things are always going wrong, and an accident happens when 2 or 3 things go wrong at once. The conference included a lot of people working on simulation, which I have been promoting for many years. The one good thing in the NHTSA regulations -- the open public database of all incidents -- may vanish in the new rules, and it would have made for a great simulator. The companies making the simulators (and the academic world) would have put every incident into a shared simulator so every new car could test itself in every known problem situation.

Still, we will see lots of simulators full of scenarios, and also ways to parameterize them. That means that instead of just testing how a car behaves if somebody cuts it off, you test what it does if it gets cut off with a gap of 1cm, or 10cm, or 1m, or 2m, and by different types of vehicles, and by two at once etc. etc. etc. The nice thing about computers is you can test just about every variation you can think of, and test it in every road situation and every type of weather, at least if your simulator is good enough,

Yoav Hollander, who I met when he came as a student to the program at Singularity U, wrote a report on the approaches to testing he saw at the conference that contains useful insights, particularly on this question of new and old thinking, and what regulations drive vs. liability and fear of the public. He puts it well -- traditional and certification oriented testing has a focus on assuring you don't have "expected bugs" but is poor at finding unexpected ones. Other testing is about finding unexpected bugs. Expected bugs are of the "we've seen this sort of thing before, we want to be sure you don't suffer from it" kind. Unexpected bugs are "something goes wrong that we didn't know to look for."

I believe that we are far from done on the robocar safety question. I think there are startups who have not yet been founded who, in the future, will come up with new techniques both for promoting safety and testing it that nobody has yet thought of. As such, I strongly advise against thinking that we know very much about how to do it yet.

A classic example of things going wrong is the movement towards "explainable AI." Here, people are concerned that we don't really know how "black box" neural network tools make the decisions they do. Car regulations in Europe are moving towards banning software that can't be explained in cars. In the USA, the draft NHTSA regulations also suggest the same thing, though not as strongly.

We may find ourselves in a situation where we take to systems for robocars, one explainable and the other not. We put them through the best testing we can, both in simulator and most importantly in the real world. We find the explainable system has a "safety incident" every 100,000 miles, and the unexplainable system has an incident every 150,000 miles. To me it seems obvious that it would be insane to make a law that demands the former system which, when deployed, will hurt more people. We'll know why it hurt them. We might be better at fixing the problems, but we also might not -- with the unexplainable system we'll be able to make sure that particular error does not happen again, but we won't be sure that others very close it it are eliminated.

Testing in sim is a challenge here. In theory, every car should get no errors in sim, because any error found in sim will be fixed or judged as not really an error or so rare as to be unworthy of fixing. Even trained machine learning systems will be retrained until they get no errors in sim. The only way to do this sort of testing in sim will be to have teams generate brand new scenarios in sim that the cars have never seen, and see how they do. We will do this, but it's hard. Particularly because as the sims get better, there will be fewer and fewer real world situations they don't contain. At best, the test suite will offer some new highly unusual situations, which may not be the best way to really judge the quality of the cars. In addition, teams will be willing to pay simulator companies well for new and dangerous scenarios in sim for their testing -- more than the government agencies will pay for such scenarios. And of course, once a new scenario displays a problem, every customer will fix it and it will become much less valuable. Eventually, as government regulations become more prevalent, homologation companies will charge to test your compliance rate on their test suites, but again, they will need to generate a new suite every time since everybody will want the data to fix any failure. This is not like emissions testing, where they tell you that you went over the emissions limit, and it's worth testing the same thing again.

The testing was interesting, but my other main focus was on the connected car and security sessions. More on that to come.

There's more to explainable than safety

* The promise of making sure that this particular flaw can be rapidly corrected. While we can certainly add the incident to the training data for the unexplainable system, that's not a guarantee that it won't happen again.

* Emotional closure. When we suffer injury or a loss of life, the impact is sometimes easier to bear if we have some explanation of why it happened, rather than the cause being a mystery. As a society we might choose a slightly higher rate of accidents, if it causes those accidents to be more emotionally palatable. (I'm thinking of the way people are far more afraid of terrorist attacks than lightning strikes - yes, it's irrational, but this bias isn't going to go away any time soon either.)

Yes, we want it for various reasons

Yes, I should not suggest safety is the only reason that people want explainable AI. There are reasons beyond even what you say. What I say is we might face the hard question of a black box AI that performs better at the best external tests we can devise compared to explainable systems that perform worse. If they are safety systems, we would find ourself in a situation of knowingly accepting more accidents and injuries in the quest to feel better about it.

Of course, the story of research on explainable AI is far from over, it has just begun. Perhaps we will find techniques that do both. There's a lot of work on making black box AIs more explainable even if you can't fully explain them, and none of that is bad. The only thing that might be bad is deliberately sacrificing safety for comfort.

I agree with you and Brad in this point: people want to know who is guilty. People (unfortunately) wants to blame somebody, the driver, the mechanics, the vendor, the car maker, the software, the AI company, but needs Someone to shout at.
Because our actual life depends a lot from cars, we did not take the proper measures to avoid car accidents, because it would means to reduce the amount of cars and the people that can use it and will complicate other things. Actual accidents occurs today because mistakes that could be avoided, but until now we prefer to take money from the guilty or send him to jail than to avoid future accidents. Robocars will not make zero accidents, but less people will dye than the babies than dye in the parents arms because mistakes. May be with robocars will be more terrorist attacks, but is not to blame robocars for that. Robocars will be less profitable for automakers, AI companies, for everybody, than actual cars. But will be more useful and safe. That must be our goal, useful and safe, not profit and whom to blame.

I can envision a whole industry emerging just to calibrate real vehicle behavior to simulator physics. It's all well and good to overfit your black box to get perfect results in your simulator, but if the simulator doesn't sufficiently match real life, well, exciting things may happen.

Yes, calibration was a big theme.

There are several types of simulation. Most simulation will be done post sensor, just testing what happens once the sensor has detected something. The virtual sensors would have virtual errors (ie. false positives and negatives in some or many frames) but otherwise act in a more ideal fashion.

Full sensor simulation takes vastly more CPU resources and as you say, still does not match the real world. However, it is worth doing, but you still need lots of real world testing.

The other end of testing is individual sensor testing. People had boxes for example you could put a radar in and they would generate radar reflections to match what might come back in the real world.

The idea of the autonomous car is going to find that applying objective logic in a subjective world is very difficult.

Yes, Brad. That is what we are doing today

Yes, we do that, but this is a different order of that. This is about a making a deliberate policy choice when the numerical evidence shows it to be less safe, and we know that while it "feels" safer it actually isn't. We do this, but it's not to be defended, is it?