I see new articles on robocars in the press every day now, though most don't say a lot new. Here, however, are some of the recent meaningful stories from the last month or two while I've been on the road. There are other sites, like the LinkedIn self-driving car group and others, if you want to see all the stories.

Four cities in the UK have been chosen for testing and development of robcars using the £10 million funding contest. As expected, Milton Keynes was chosen along with Coventry, and also Greenwich and Bristol. The BBC has more.

Chinese competition has another round

Many don't know it, but China has been running its own "DARPA Grand Challenge" style race for 6 years now. The entrants are mostly academic, and not super far along, but the rest of the world stopped having contests long ago, much to its detriment. I was recently in Beijing giving a talk about robocars for guests of Baidu -- my venue was none other than the Forbidden City -- and the Chinese energy is very high. Many, however, thought that an announcement that Baidu would provide map data for BMW car research meant that Baidu was doing a project the way Google is. It isn't, at least for now.

I've seen lots of calls from cities and regions that robocars come there first. In the fall, the mayor of Los Angeles made such a call. What makes this interesting is that LA is indeed a good early target city, with nice wide and simple roads, lots of freeways, and relatively well-behaved drivers compared to the rest of the world. And it's in California, which is where a lot of the best development is happening, although that's all in the SF Bay Area.

Concept designs for CES and beyond 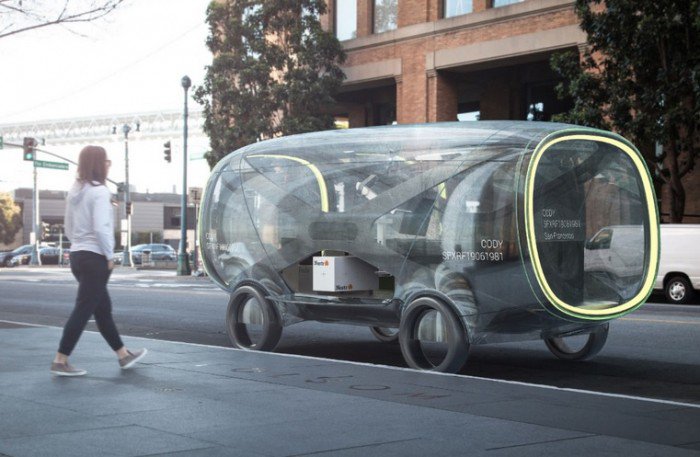 More interesting concept cars are arising, as designers realize what they can do when freed of having a driver's seat that faces forward and has all the controls, and as electric drivetrains allow you to move around where the drivetrain goes. Our friends at the design firm IDEO came up with some concepts that are probably not realistic but illustrate worthwhile principles. In particular, their vision of the delivery robot is quite at odds with mine. I see delivery robots as being very small, just suitcase sized boxes on wheels, except for the few that are built for very large cargo like furniture and industrial deliveries. Delivery robots will come to you on your schedule, not on the delivery company's schedule. There will be larger robots with compartments when you can service a group of people who live together, but there is a limit to how many you can serve and still deliver at exactly the right time that people expect.

Everybody is also interested to see what Daimler will unveil at the Consumer Electronics Show. They showed off an interior with face-to-face seating and everybody wearing a VR headset, and have been testing a car under wraps.

It's interesting to think about the VR headset. A lot of people would get sick if jostled in a car while wearing a VR headset. However, it might be possible to have the VR headset deliberately bounce the environment it's showing you, so that it looks like you're riding a car in that environment that's bumping just the way you are. Or even walking.

Robocars work better if they get a really detailed map of their environment to drive with. Google's project is heavily based on maps, and they have mapped out all the roads they test near Google HQ. Nokia's "Here" division has decided to enter this in a big way. Nokia calls its projects "HD Maps," which is a good name because you want to make it clear that these are quite unlike the navigation maps we are used to from Google, Here and other companies. These maps track every lane and path a car could take on the road, but also every lane marker, every curb, every tree -- anything that might be seen by the cameras and 3D sensors.

Nokia makes the remarkable claim to have produced 1.2 million miles of HD Maps in 30 countries in the last 15 months. That's remarkable because Google declared that one of their unsolved problems was that the cost of producing maps, and they were working to bring that cost down. Either Nokia/Here has made great strides in reducing that cost, or their HD Maps are not quite at the level of accuracy and detail that might be needed.

Nonetheless, the cost of the mapping will come down. In fact, many people express surprise when they learn that the cars rely so heavily on maps, as they expect a vehicle that, like a human being, can easily drive on a road they've never seen before, with no map. Humans can do that, but a car that could do that is also a car that could build the sort of map we're talking about, in real time. Making the map ahead of time has several advantages, and is easier to do than doing it in real time. Perhaps some day that real-time map builder (what roboticists call Simultaneous localization and mapping) will arise, but for now, pre-mapping is the way to go.

There was recently press about the kept-quiet acquisition by Google of 510 Systems. I was at Google at the time, and it involves friends of mine, so I will have to say there are some significant errors in the story, but it's interesting to see it come out. It wasn't really that secret. What Anthony did with PriBot was hardly secret -- he was on multiple TV shows for his work -- and that he was at Google working at first on Streetview and later on the car was also far from secret. But it wasn't announced so nobody picked up on it.

"for now, pre-mapping is the way to go"

Maybe for test vehicles, but fully autonomous, real-world production ones are just going to have to be able to deal instantaneously with unexpected changes like road construction shifting traffic across the divider, blocked streets and detours (ie both signed and unsigned), and cones/flares on the road due to accidents, plus traffic directions being given by police officers, construction workers, school crossing guards, parking attendants, etc.

Going to have to?

Well, that's not the prevailing opinion.

Yes, they will have to "deal with" changes to the terrain, but that's not at all the same as being able to drive just as well on an unmapped road (or more correctly, a road that has some differences from the map) than on a mapped road.

And if the road crews have actually done what they were supposed to do and logged the project, no car is surprised by it, and so we only are thinking about the first cars to encounter rare unscheduled projects where the crew violated protocols to log their work in the database.

You're thinking like a human, who has to handle a random situation. How often have you been the first car ever to encounter a construction zone? The first to enter an unplanned one?

Because it's rare, it's acceptable to then drive with extreme caution, even to pull over. If you have a human passenger, they can guide the car through the zone -- also recording it. If the vehicle is vacant, and there is network connectivity it can ask for remote assistance as it moves with caution through the zone. If there is no connectivity and it can't figure out the road, it would pull over and wait for somebody else to come. But we're talking about a car that can drive the new road 99.9% of the time, so giving up only happens 1 time in 1,000 in one construction zone out of 100. And one time in 100 there is nowhere to pull over so it blocks traffic until a construction worker comes and guides it out.

In other words, a trivial amount of traffic obstruction.

Being able to handle 99.9% is actually doable today, but as you might guess, 99.9% is far from good enough for ordinary driving. Not handling one road in 1,000 is an unusable system. But not handling 1 surprise construction zone in 1,000 is no big whoop. By "not handling" I mean deciding you can't handle it and pulling over. Not doing something unsafe. But it's easy to be safe when you are cautious and slow.

Truth is, if it ever became a problem that these first encountering cars created trouble in new surprise construction zones, it would do even more to encourage the crews to log the zones in the database before they start work. If you combine that with transponders on construction equipment (which is already planned) and even on the cones (which is also planned) the odds become even lower.

Google has already shown their vehicle detecting cones and changing lanes as marked. This level of operation is not far away.

Even if you have a real time SLAM ability, pre-mapping is still desired. You're always going to do better with a pre-computed map than you will in real time, because the pre-computed map was built from multiple sensor passes, processed with an arbitrarily large amount of CPU time and huge databases, and has had the chance for human review. Even if you are highly confident of your off-map abilities, you still will use pre-built maps. Why wouldn't you?

There's a constant overhead comprising the sensor system, computer and enough battery to run it. This will limit the economic size of the delivery bots.

The delivery robot needs only enough battery to do its deliveries and get home. The same people or mechanism who put cargo in it can swap a battery pack.

The sensor system is quite light -- you should look at the latest generations of cameras and lidars and radars. The computer should be perhaps 400g or less.