You may not know the name of Continental, but they are a major supplier of components to the big automakers. A story in the Detroit Free Press details their latest project in autonomous driving. This is a VW Passat using radar Automatic-Cruise-Control combined with lane-keeping, similar to projects announced by Mercedes and VW/Audi itself. The story has a video showing the screen of the car displaying its lane-keeping. The car also has side radars to track vehicles or barriers to the left and right, according to the story. It's aimed at stop-and-go traffic and empty highway. If it's like the other products it requires constant human supervision, as it is not safe to not look at the road in case the lane markers vanish or other unexpected problems occur. 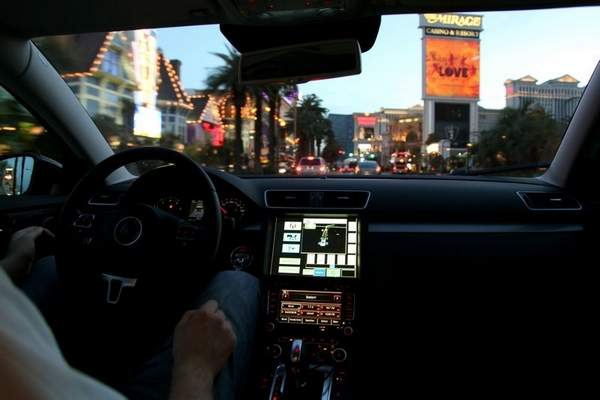 They claim they have done 6500 miles in Michigan, and that soon they will have the 10,000 needed for a testing licence in Nevada. The new Nevada law allows developers of robocars to test on Nevada highways once they have shown 10,000 miles on a test track or in another state, and under special testing rules. (The Google cars have over 200,000 miles in California and Nevada.)

The Nevada regulations specifically exempt vehicles which require full time human supervision, so in theory they don't need a Nevada testing licence if this is such a vehicle. If it is planned to operate without such supervision it needs the licence and is more advanced that the other systems of this type.

According to a different story from Motor Trend the vehicle has the ability to swerve around obstacles, it is claimed. This might be the Emergency Steer Assist Continental announced last summer. It uses stereo cameras and 5 radars.

An interesting note about the photo, credited to Conti -- if this car actually does qualify as an autonomous car in Nevada, then that picture of the car robo-driving in Las Vegas presumably was taken before the regulations came into effect.

Sources claim a car will be able to sell with these systems in about three years. This work appears to be an extension of the system demonstrated in the European HAVEit project.

Presumably this is the German company known primarily as a tyre manufacturere?

It is that company, and consumers know them for the rubber, but they actually make a lot of automotive components.