The California DMV got serious in their battle with Uber and revoked the car registrations for Uber's test vehicles. Uber had declined to register the cars for autonomous testing, using an exemption in that law which I described earlier. The DMV decided to go the next step and pull the more basic licence plate every car has to have if based in California. Uber announced it would take the cars to another state.

While I'm friends with the Uber team, I have not discussed this matter with them, so I can only speculate why it came to this. As noted, Uber was complying with the letter of the law but not the spirit, which the DMV didn't like. At the same time, the DMV kept pointing out that registering was really not that hard or expensive, so they can't figure out why Uber stuck to its guns. (Of course, Uber has a long history of doing that when it comes to cities trying to impose old-world taxi regulations on them.)

The DMV is right, it's not hard to register. But with that registration comes other burdens, in particular filing regular public reports on distance traveled, interventions and any accidents. Companies doing breakthrough R&D don't usually work under such regimes, and I am speculating this might have been one of Uber's big issues. We've all see the tremendous amount of press that Google has gotten over accidents which were clearly not the fault of their system. The question is whether the public's right to know (or the government's) about risks to public safety supersedes the developer's desires to keep their research projects proprietary and secret.

It's clear that we would not want a developer going out on the roads and having above-average numbers of accidents and keeping it hidden. And it may also be true that we can't trust the developers to judge the cause of fault, because they could have a bias. (Though on most of the teams I have seen, the bias has been a safety paranoid one, not the other way around.)

Certainly when we let teens start to drive, we don't have them make a public report of any accidents they have. The police and DMV know, and people who get too many tickets or accidents get demerits and lose licences when it is clear they are a danger to the public. Perhaps a reasonable compromise would have been that all developers report all problems to the DMV, but that those results are not made public immediately. They would be revealed eventually, and immediately if it was determined the system was at fault.

Uber must be somewhat jealous of Tesla. Tesla registered several cars under the DMV system, and last I saw, they sent in their reports saying their cars had driven zero miles. That's because they are making use of the same exemption that Uber wanted to make use of, and saying that the cars are not currently qualifying as autonomous under the law.

Waymo has unveiled its 4th generation vehicle, a fleet of 100 Chrysler Pacifica minivans. The partnership was announced in May and the new vehicle has various custom modifications 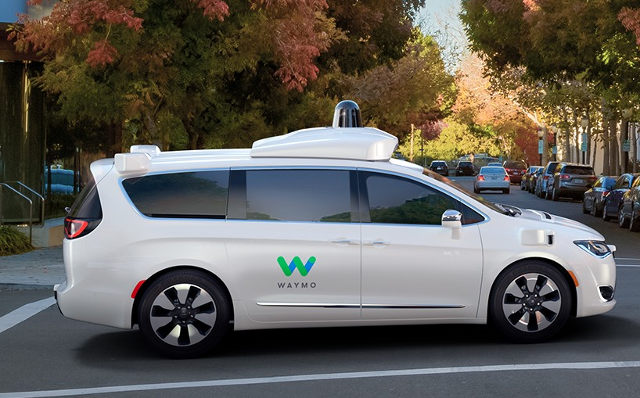 As you can see, the van still has Waymo's custom 360 degree LIDAR dome on top, and two sensors at the back top corners, plus other forward sensors. The back sensors I would guess to be rear radar -- which lets you make lane changes safely. We also see three apparent small LIDARs, one on the front bumper, and the other two on the sides near the windshield pillars with what may be side-view radars.

A bumper LIDAR makes sure you can see what's right in front of the bumper, an area that the rooftop LIDAR might not see. That's important for low speed operations and parking, or situations where there might be something surprising right up close. I am reminded of reports from the Navya team that when they deployed their shuttles, teens would try to lie down in front of the shuttle to find out if it would stop for them. Teens will be teens, so you may need a sensor for that.

Side radar is important for cross traffic when trying to do things like making turns at stop signs onto streets with high speed. Google also has longer range LIDAR to help with that.

The minivan is of course the opposite end of the spectrum from the 2-passenger no-steering-wheel 3rd generation prototype. That car tested many ideas for low speed urban taxi operations, and the new vehicle seems aimed at highway travel and group travel (with six or more seats.) One thing people particularly like is that like most minivans these days, it has an automatic sliding door. Somehow that conveys the idea of a robotic taxi even more when it opens the door for you! The step-in-step-out convenience of the minivan does indeed give people a better understanding of the world of frictionless transportation that is coming.

Update: Also announced yesterday was a partnership between Honda and Waymo. It says they will be putting the Waymo self-driving system into Honda cars. While the details in the release are scant, this actually could be a much bigger announcement than the minivans, in which Chrysler's participation is quite minimal. Waymo has put out the spec for the modified minivan, and Chrysler builds it to their spec, then Waymo installs the tech. A Waymo vehicle sourced from Chrysler. The Honda release suggests something much bigger -- a Honda vehicle sourced from, or partnering with Waymo.

There has not been as much press about this Honda announcement but it may be the biggest one.

NPRM for DSRC and V2V

The DoT has finally released their proposed rules requiring all new cars (starting between 2020 and 2022) to come equipped with vehicle-to-vehicle radio units, speaking the DSRC protocol and blabbing their location everywhere they go. Regular readers will know that I think this is a pretty silly idea, even a dangerous one from the standpoint of privacy and security, and that most developers of self-driving cars, rather than saying this is a vital step, describe it as "something we would use if it gets out there, but certainly not essential for our vehicles."

I will have more comment on this in the future.