GM revealed photos of what they say is the production form of their self-driving car based on the Chevy Bolt and Cruise software. They say it will be released next year, making it almost surely the first release from a major car company if they make it. 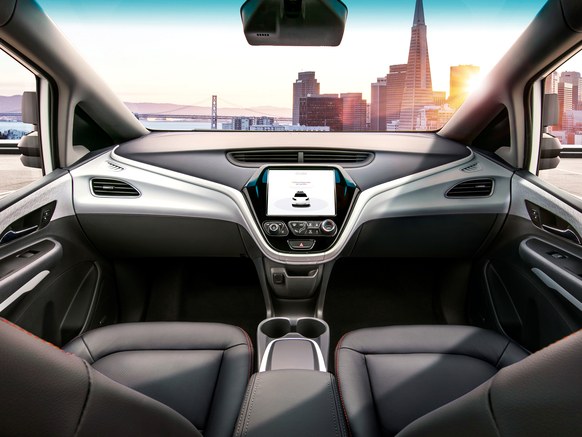 As reported in their press release and other sources their goals are ambitious. While Waymo is the clear leader, it has deployed in Phoenix, because that is probably the easiest big city for driving in the USA. Cruise/GM claims they have been working on the harder problem of a dense city like San Francisco.

What's notable, though, about the Cruise picture is what's not in it, namely much in the way of dashboard or controls. There is a small screen, and a few controls but little else. Likewise the Waymo 3rd generation "Firefly" car had almost no controls at all.

The car has climate controls and window controls and little else. Of course a touchscreen can control a lot of other things, especially when the "driver" does not have to watch the road.

At most car conferences today, a large fraction of what you see is related to putting new things inside the car -- fancier infotainment tools and other aspects of the "connected car." These are the same companies who charge you $2,000 to put a navigation system into your car that you will turn off in 2 years because your phone does a better job.

It is not surprising that Google expects you to get your music, entertainment and connectivity from the device in your pocket -- they make Android. It is a bigger step for GM and Daimler to realize this, and bodes well for them. 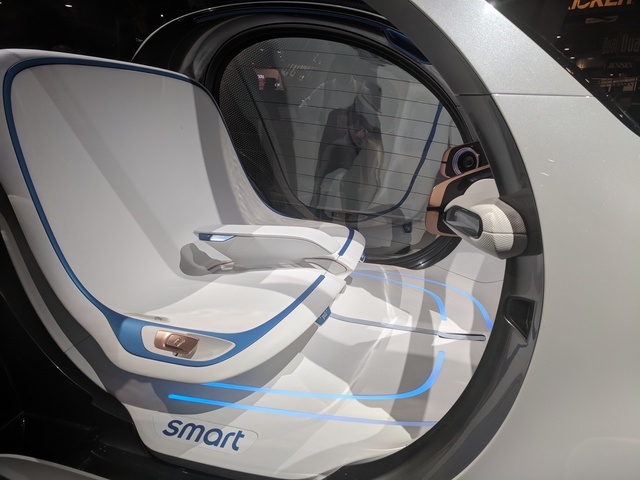 While the car is not finalized and the software certainly isn't, GM feels it has settled on the hardware design of its version 1 car, and is going into production on it. I suspect they will make changes and tweaks as new sensors come down the pipeline, but traditionally car companies have always locked down the main elements of the hardware design a couple of years before a vehicle is available for sale.

One thing both of these cars need more of, which I know well from road tripping, is surfaces and places to put stuff. Cupholders and door pockets aren't enough when a car is a work or relaxation station rather than something to drive.

What is not clear is if they have been bold enough to get rid of many of the other features not needed if you're not driving, like fancy adjustable seats. The side-view mirrors are gone but sensors are in their place (it is widely anticipated that they will allow even human driven cars to replace the mirrors with cameras, since that's better and lower drag.) Waymo's firefly had the mirrors because the law still demands them.

GM is also already working with NHTSA to get this car an exception to the Federal Motor Vehicle Safety Standards which require the things like the steering wheel that they took out. The feds say they will work quickly on this so it seems likely. Several states are already preparing the legal regime necessary, and GM suggests it will deploy something in 2019.

Not too long ago, I would have ranked GM very far down on the list of carmakers likely to succeed in the robocar world. After they acquired Cruise they moved up the chart, but frankly I had been skeptical about how much a small startup, no matter how highly valued, could change a giant automaker. It now seems that intuition was wrong.

A few random thoughts on how a robotaxi might be designed specificaly for running a short haul service.

Assumptions:
1. Most of the trips are done over short distances with little luggage (generally backpack/briefcase or none)
2. Ride sharing is moderately common.
3. Relatively few of the trips are on a highway at high speed.
4. The huge benefits of right sizing have been covered by you, are

Given 1, we could consider removing a trunk/boot altogether and instead provide some limited space inside the vehicle for a bag. One option would be between the left and right passenger. Another might be the move the windscreen all the way forward in the fashion of people movers suach as the Renault Espace or Toyota Previa.
If luggage partially obscures the view of the road it is of little consequence.
Given 1 and 3 then easy ingress/egress is important. If few of the trips are at highway speeds them optimising for drag is of lower priority, so a more upright vehicle high seat and low floor seem apt. If ridesharing is important then speedy access would save time.
Given 3, a certain amount of reduction in performance is quite acceptable and some corresponding reduction in mass could be achieved almost straight away. Once the lower crash rate is achieved and believed, then the mass could be reduced further.
As you mentioned not only are highly adjustable seats not necessary, but folding seats are probably not needed either, purpose built robotaxis could run the airport link.
Do we require a rear window? it is seldom used by passengers, and now not required for driving.
An expensive or even any sound system probably makes little sense as people tend to provide their own.
Even though the likelihood of crashes might be lower, with the removal of the driver controls and instrument binnacle, a redesign expressly to make the interior more survivable to an impact might be possible. Perhaps the windscreen could be completely replaced by a head friendly material of lower optical qualities (or even no forward viewing at all)
As far as provision for work/entertainment perhaps a docking station is suitable especially if it is made so that the peripherals (screens, keyb, mouse, other) can be readily replaced. Maybe a game controller too for games which run on the mobile device but use the screen for output.
I hope in the not too distant future though that screens are replaced by a successor to google glass.

I actually don't think ride sharing need be that common except at rush hour. As such, a half-width vehicle seems like the best design, and that is smaller and lighter.

Many of the other points are valid and will affect design. Rear windows can be eliminated, though I am not sure if that saves all that much and when cars are used for sightseeing people will want it. Also, some cars will involve face to face seating and there a rear window is desired.

Tim Kentley-Klay wants to remove the windows fore and aft, I am not as keen on it. People who get motion sickness like it. But it does not need to be a giant sheet for visibility any more. A grid window is fine, and indeed it could have some crash protection though I think it's a while before we'll lose the seatbelt. Note in rear facing seating, you are much better off in a forward crash. It is unknown what the most common type of crash in these vehicles might be. A car might even be able to deliberately spin itself to make all crashes come from the best direction.

Alas, you can't trust input devices from a docking station which presents a problem.

It could be useful from a safety POV if it was easy for multiple passengers, especially children, to easily enter and leave the vehicle from the sidewalk side. I am sure cyclists would appreciate vehicles that only had emergency doors on the road side. Internally a vehicle with extra vertical room and seating a little more like rear bench seats could help.

To take it further if small driverless ride share vehicles replaced school buses, then physical barriers in school drop off lanes not unlike short airport docking bridges could keep small children out of harms way.

Where you get out

For the cyclists, a good robocar should be able to detect any cyclist or car coming up on the street side, and warn (or not open the door) if there is a danger. It could even warn if you try to get out.

The ideal drop-off arrangement is perpendicular spots or angled spots. I expect those to be built at locations that have very high volumes of pick up and drop off. With the lowered demand for street parking space can be found.

On the other hand, if you have a car that is 2 people wide, people with less mobility want to get out on the side they are on. I think a warning system can do the job.

Purpose built shuttles tend to have more room and doors on the sidewalk side only, I am talking about traditional car designs which don't have so much room to move around inside.

It is true, however, that since a robocar can back up just as confidently as it goes forward, it can always place itself so that the door needed is against the curb.

Hopeless dreamers, as soon as

Hopeless dreamers, as soon as that vehicle is released into the world as an unsupervised robo-taxi it will vandalised and wrecked. You only have to take a look at traditional taxis, trains and commercial aircraft to realise how much tougher the interior of an AV will have to be to survive more than 5 minutes real world usage. Actually, elevators in unloved public spaces are probably a better model. Broken controls, smashed/scratched/graffitied displays and slashed seats are the future of GM AVs sadl

Except people are identified

Modern cell phone taxi services do not yet allow anonymous riding, the way taxis and elevators do. I want to change that, but even my proposal still protects the vehicle owner.

When they know you and have your credit card and reputation when you ride, you don't want to trash the vehicle. While the next occupant will of course report it when they get it (to avoid being blamed themselves) another solution is a camera which shoots a flash picture of the interior after you get out. It has a physical shutter for your privacy, but you can't end the right without opening that shutter. The next rider closes it when starting their ride.

The main reason for this camera will not be to detect vandalism. It will detect if you left something behind, and send the car right back to you to get it. Or if you puke on the seat. If you do, the car goes off to a car wash and you (or your privacy proxy) get the bill. If you actually trash it, go ahead, but it's billed to your credit card with photo evidence. Vandalism on the outside will be recorded by the outward facing cameras all these cars have.