Great power graphic tells us -- put solar power in New Mexico, but how?

I'm impressed with a great interactive map of the U.S. power grid produced by NPR. It lets you see the location of existing and proposed grid lines, and all power plants, plus the distribution of power generation in each state. 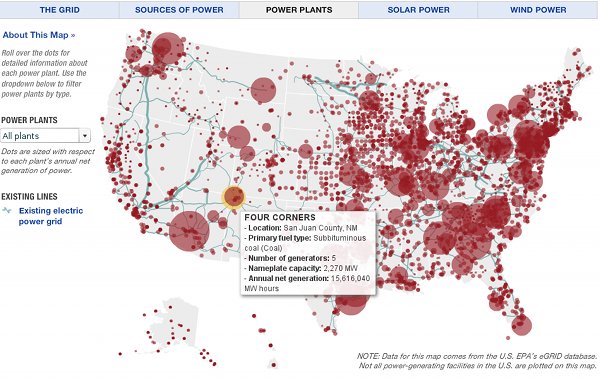 On this chart you can see which states use coal most heavily -- West Virginia at 98%, Utah, Wyoming, North Dakota, Indiana at 95% and New Mexico at 85%. You can see that California uses very little coal but 47% natural gas, that the NW uses mostly Hydro from places like Grand Coulee and much more. I recommend clicking on the link.

They also have charts of where solar and other renewable plants are (almost nowhere) and the solar radiation values.

Seeing it all together makes something clear that I wrote about earlier. If you want to put up solar panels, the best thing to do is to put them somewhere with good sun and lots of coal burning power plants. That's places like New Mexico and Utah. Putting up a solar panel in California will give it pretty good sunlight -- but will only offset natural gas. A solar panel in the midwest will offset coal but won't get as much sun. In the Northeast it gets even less sun and offsets less coal.

Much better than putting up solar panels anywhere, howevever, is actually using the money to encourage real conservation in the coal-heavy areas like West Virginia, Wyoming, North Dakota or Indiana.

While, as I have written, solar panels are a terrible means of greening the power grid from a cost standpoint, people still want to put them up. If that's going to happen, what would be great would be a way for those with money and a desire to green the grid to make that money work in the places it will do the best. This is a difficult challenge. People sadly are more interested in feeling they are doing the right thing rather than actually doing it, and they feel good when they see solar panels on their roof, and see their meter going backwards. It makes up for the pain of the giant cheque they wrote, without actually ever recovering the money. Writing that cheque so somebody else's meter can go backwards (even if you get the savings) just isn't satisfying to people.

It would make even more sense to put solar-thermal plants (at least at today's prices,) wind or geothermal in these coal-heavy areas.

It might be interesting to propose a system where rich greens can pay to put solar panels on the roofs of houses where it will do the most good. The homeowner would still pay for power, but at a lower price than they paid before. This money would mostly go to the person who financed the solar panels. The system would include an internet-connected control computer, so the person doing the financing could still watch the meter go backwards, at least virtually, and track power generated and income earned. The only problem is, the return would be sucky, so it's hard to make this satisfying. To help, the display would also show tons of coal that were not burned, and compare it to what would have happened if they had put the panels on their own roof.

Of course, another counter to this is that California and a few other places have very high tiered electrical rates which may not exist in the coal states. Because of that -- essentially a financial incentive set up by the regulators to encourage power conservation -- it may be much more cost-effective to have the panels in low-coal California than in high-coal areas, even if it's not the greenest thing.

An even better plan would be to find a way for "rich greens" (people willing to spend some money to encourage clean power) to finance conservation in coal-heavy areas. To do this, the cooperation of the power companies would be required. For example, one of the best ways to do this would be to replace old fridges with new ones. (Replacing fridges costs $100 per MWH removed from the grid compared to $250 for solar panels.)

To the person with the old fridge, they get a nice new fridge at a discount price -- possibly even close to free. Their power bill on the fridge goes down 20%. The rest of the savings (about 30% of the power, typically) goes to the power company and then to the person who financed the rebate.

A number of the steps above are there to minimize fraud. For example, you don't want people deliberately digging out an ancient fridge and putting it in place to get a false rebate. You also don't want them taking the old fridge and moving it into the garage as a spare, which would actually make things worse. The latter is easy to assure by having the delivery company haul away the old one. The former is a bit tricky. The above plan at least demands that the old fridge be in place in their kitchen for a couple of months, and there be no obvious signs that it was just put in place. The metering plan demands wireless internet in the home, and the ability to configure the appliance to use it. That's getting easier to demand, even of poor people with old fridges. Unless the program is wildly popular, this requirement would not be hard to meet.

Instead of wireless internet, the fridge could also just communicate the usage figures to a device the meter-reader carries when she visits the home to read the regular meter. Usage figures for the old fridge would be based on numbers for the model, not the individual unit.

It's a bit harder to apply this to light bulbs, which are the biggest conservation win. Yes, you could send out crews to replace incandescent bulbs with CFLs, but it is not cost effective to meter them and know how much power they actually saved. For CFLs, the program would have to be simpler with no money going back to the person funding the rebates.

All of this depends on a program which is popular enough to make the power monitoring chips and systems in enough quantity that they don't add much to the cost of the fridge at all.

Exactly what I want my appliances doing, reporting on me!

This is reporting to the power company how much power it uses. This is already done for your whole house, of course. I don't see a big problem in getting a report on a particular appliance as long as it is done once a month, not hourly, just to see how much of the power it used. The internet access may indeed be overkill. A little zigbee link to the meter reader's terminal is more than enough.

I figure he was 'pulling

I figure he was 'pulling your crank' in fun.
Nice reading here, Brad. You do come up with some WFO ideas...which is fine in this day and age. I was going through a YouTube bit on the number of times the kids could be expected to change their occupation these days. The implications for education were astounding. Found at Dr. John's Hiding Place http://my.opera.com/nepmmak2000/blog ( science writer who also blogs on Ubuntu ) but it was a while back this year.