So far it's been big players like Google and car companies with plans in the self-driving space. Today, a small San Francisco start-up named Cruise, founded by Kyle Vogt (a founder of the web video site Justin.tv) announces their plans to make a retrofit kit that will adapt existing cars to do basic highway cruise, which is to say, staying in a lane and keeping pace behind other cars while under a driver's supervision.

I've been following Cruise since its inception. This offering has many similarities to the plans of major car companies, but there are a few key differences:

They're so dedicated to the retrofit idea that the Audi A4 they are initially modifying does not even have drive-by-wire brakes like the commonly used hybrid cars. Their kit puts sensors on the roof, and puts a physical actuator on the brake and another physical actuator on the steering wheel -- they don't make use of the car's own steering motor. They want a kit that can be applied to almost any car the market tells them to target. 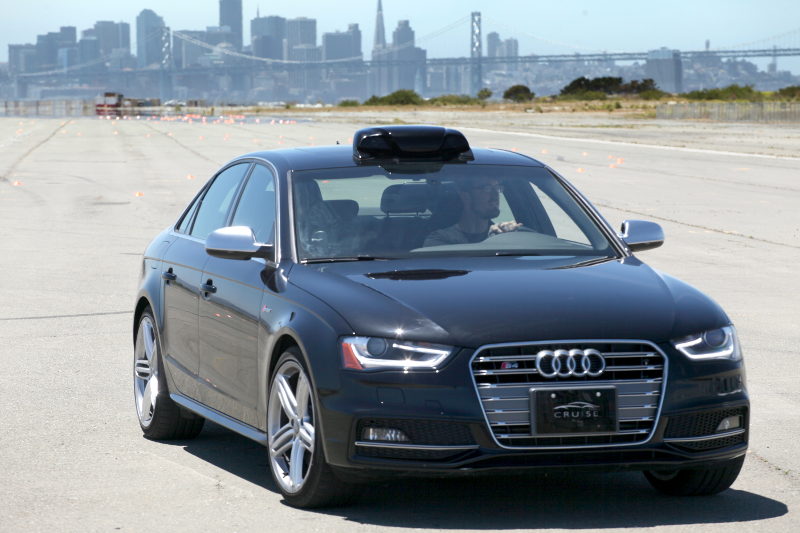 They won't do every car, though. All vendors have a strong incentive to only support cars they have given some solid testing to, so most plans don't involve retrofit at all, and of course Google has now announced their plans to design a car from scratch. Early adopters may be keen on retrofit.

I rode in the car last week during a demo at Alemeda air station, a runway familiar to viewers of Mythbusters. There they set up a course of small orange cones, which are much easier to see than ordinary lane markings, so it's hard to judge how well the car does on lane markings. It still has rough edges, to be sure, but they don't plan to sell until next year. In the trial, due to insurance rules, it kept under 40mph, though it handled that speed fine, though drifted a bit in wider parts of the "lane."

On top is an aerodynamic case around a sensor pack which is based on stereo cameras and radar from Delphi. Inside is just a single button in the center arm console to enable and disable cruise mode. You take the car to the lane and push the button.

All stuff we've seen before, and not as far along, but the one key difference -- being a nimble startup -- may make all the difference. Only early adopters will pay the $10,000 for a product where you must (at least for now) still watch the road, but that may be all that is needed. 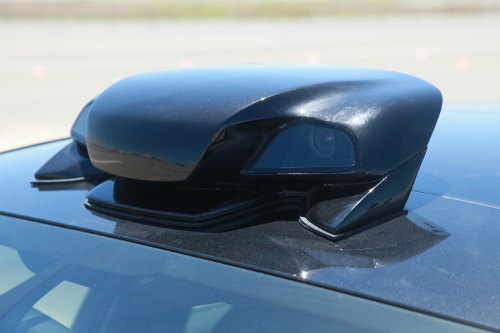 What are the chances of this showing up as retrofits for big rig trucks? In theory we have A. simple highway driving B. professional drivers C. deeper pockets for the tech D. already fleet managed, etc. I've been quite surprised that we've not heard more about autonomous cars getting started with highway trucking and this would seem a helpful technology for that.

There are several reasons you don't start with trucks.

There is a company called Peloton building a system for 2 trucks to pair up for fuel savings. The drivers remain alert, though.

Those are good points. I was impressed with the Volvo Sartre project too. But maybe you're right that big highway accidents are worse than small city ones. Maybe another factor is that autonomous cars can radically destabilize the current ways cargo is sent. In other words, maybe the whole system as we know it will be radically different.

I've always assumed that while the drivers (and owner operators) would be less than interested and expect a lot of push back from unions.

On the other hand, trucking companies are presumably looking to lower operating costs. And especially for longer highway runs that exceed the time a single operator can drive autonomous solutions will look attractive EVEN if they leave a person in the vehicle to supervise.

Delivery vans from the large package delivery companies (UPS, FedEx etc) might be another interesting application. Let the van do the driving while the operator does paperwork in the back. Also the truck can circle the block where parking is otherwise unavailable. Presumably for any specific implementation cost there would be a specific goal of n% efficiency improvement and if that can be achieved there will be interest.