Here are some notes based on my recent trip to Finland, Sweden and Russia. Not about the places -- that will come with photos later -- but about the travel itself.

The ferries between Helsinki and Stockholm are really cruise ships. It takes about 16 hours and is a very popular method of travel between the cities, especially for families. There is no really practical land route, and the competition keeps the prices of these things down. In addition, they play tricks to allow duty free shopping, and unlike many duty free shops which are just ripoffs, these ones are competitive and do a brisk business. I'm told they are also party boats, but due to jet lag I was asleep not long after the Smörgåsbord. Unlike most cruise ships, these have almost nothing included, not the sauna, not the food and probably not even the mandatory showing of Abba's "Mamma Mia."

Because it the boat left at sunset and I planned to be awake and above at sunrise for photography of the Swedish Archipelago, and the moon was new, I decided there would be nothing to see, and I took an inside cabin. I was surprised to learn that, even though I knew it was dark and largely featureless outside, it bothered me to be in the sealed room. I reiterate my call that ship inside cabins come with a TV showing a closed circuit view of the outside in the correct direction. If they are not ready to do that (this ship didn't even have TVs) I think a light behind the curtains of the fake window which simulates, based on just the clock, what the light should be like outside, would actually still be a positive step.

Or, failing that, if they put internet in the rooms, people could display the closed circuit video on the screen they brought with them...

On a ship like this, the shower takes up a lot of a very small room while being very cramped anyway. While most people want a toilet in their room, some communal locker room showers might make sense for preserving space. Of course, you still need a lot of them as demand comes at the same time, but not quite as many.

I think I'll go back to a window for my next cruise cabin. But not a balcony. I have found that when I've had a balcony I sat on it for an hour of the entire week, and it took a lot of space out of the cabin. 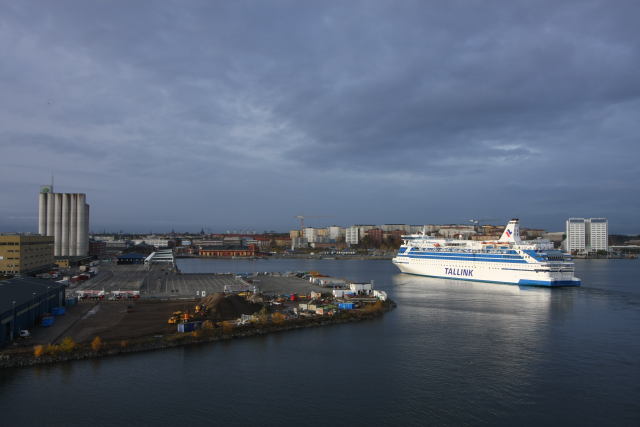 The nice thing about the overnight cruise, of course, is that it made the trip between cities happen at night, offering a near full day in each city on either end. The arrival is a bit late at 10am, but that time is spent on a cruise of the islands, which all Stockholm tourists want anyway. It made me wonder if it was possible to arrange that sort of travel among close coastal cities in the USA or Canada (Boston to DC?) but perhaps the seas are not as reliable. And of course there is the Jones Act.

For the tourist, it also means the cruise is one of your hotel nights, and it costs only a little more for two people than a typical Stockholm hotel.

Arriving in Stockholm, I was advised I should take a cab to our hotel and it would cost under $20. I had to eat my own words about cab competition because I got into a predator cab in the line at the ferry terminal which charged 5 times the typical rates. A few blocks away we noticed the meter going up one SEK (13 cents) per second and asked the driver to stop. He got abusive and threatening, and with my luggage implicitly hostage, I paid $25 to be dumped on the street in the rain with 3 suitcases and no SEK. Turned out there was a subway stop not far away, though that's no fun with lots of bags.

Turns out the cabs do have their prices on them in the window, and no Swede would hire such a cab, but tourists unaware of the system can be easy marks, so no surprise this cab was at the ferry terminal. I had written earlier that I don't believe in the heavy Taxi regulation most cities have, though I had come so much to expect it I got burned. The main argument for the regulation is that you can't shop while standing waiting to hail a cab, but I can now see another argument about it on taxis serving people who will not know the local markets.

Stockholm transit was quite good, and we got an unlimited pass so used it a lot, though in many cases a cab would have probably saved valuable time. But we were so burned by our first Stockholm taxi experience that we just never felt the desire to use one again until the trip to the airport, which we had the hotel arrange.

St. Petersburg transit is a very different experience. It's cheap: Typical fare of 16-18 rubles (around 60 cents) for official transit, 23 rubles for private buses that are more common. It's very heavily used. Oddly, there did not appear to be transfers. If you wanted to change from trolley to bus, you seemed to pay again, or so our host told us. While at the low price this should not be a problem, it does mean you're more likely to walk if you only have to go one or two stops on the 2nd leg.

The subway (which is quite grand, a Soviet showpiece) was packed to the gills on Sunday afternoon. We didn't ride it during rush hour, and I'm glad. The subway isn't actually terribly useful for the city core where the tourist sites are, though there happened to be a stop near our nice B&B.

Transport to/from the airport is another story, with most services seeming to run 40 to 60 Euros, though our host arranged a private car (by which I mean, just some guy's Volga) for 30 Euros. We didn't try it, but there is also an ad-hoc private taxi system. Stick out your arm and a private citizen will come pull over and negotiate a price, if they are going your way.

As noted, our driver had a Volga, but generally the streets are full of foreign cars. The car everybody wants is a Corolla. Ford is making big inroads too, along with Hyundai.

Finnair is charging for soft drinks on board, that trend is growing. ?????? (Rossiya) airlines still uses paper tickets, that was strange and frustrating. United Airlines won't let a Premier member upgrade on a United Flight if their ticket came from Lufthansa (which I needed to do to make the Finnair connection as UA doesn't partner with them.)

When I got my HTC Mogul phone, it had a GPS inside it, but the firmware didn't enable it. So while in Germany in January, I used an external bluetooth GPS which worked OK, if being a bit silly. After I got back I got a phone firmware upgrade, which enabled the internal GPS, which has been very handy since then. When I got back to Europe I discovered two annoying things:

So brickbats for Sprint/HTC for this bizarre configuration, and I hope they fix it.