Study claims robocars increase polution; they could not be more wrong

A recently published article on robocar pollution with associated paper from Boston University warns of robocars increasing pollution by increasing vehicle miles combined with the emissions of some sections of the U.S. energy grid.

The premise that VMT increases is a reasonable one, especially outside the US, where car travel becomes more popular as you make it more convenient and cheaper. People may also do longer commutes. But the paper presumes vehicles and fleets like we have today, and a grid like we have today.

There is strong evidence the grid will improve and go solar, especially in sunny places. In sunny places, solar is now the cheapest method of building a new power plant. (Running existing NG and coal plants is still slightly cheaper but this may not be that way for long.) Of course, electric cars don't charge too much from solar because they are on the roads during the day, so storage is still needed.

The main issue though is the fleet. 80% of trips are short and solo. Today, these are almost all driven in 5 passenger cars. Small cars exist but are not popular in the USA, because people there buy cars to meet all their car needs for the next 5 years, and that includes occasionally carrying extra people and cargo.

Would a taxi fleet operator send a sedan to carry a solo passenger on a short trip? I predict sedans will cost twice as much money to operate as solo cars. Solo cars will use half the energy (or less) of sedans and be less than half the weight and about 1/3rd the size. They will cost less than half as much to build and need less than half the battery capacity. Most of their maintenance and repair costs will be lower. Even their insurance cost may be less because with the lower weight, they can do less damage.

The largest cost in operating a vehicle today is depreciation. Use a cheaper car and the ride costs less. Customers want that, and even if they don't, operators want that. Customers may be willing to pay more for a larger vehicle to ride in alone, and they will be able to.

The key question of the paper is energy, and energy is less for a solo, narrow vehicle. It will have less than half the weight, and also half the drag by being narrow. In addition, it may operate only for lower speed urban trips, which use less energy. (Losses due to drag go up with the square of velocity, while losses due to weight are linear with velocity.) Electric vehicles recover some braking energy with the stop and go of urban driving, which is another plus, and is why electrics and hybrids get better city "mileage" than highway.

In the future, cities may wish to regulate roads, and incentivize small, narrow vehicles. Today they already do this by giving motorcycles the ability to lane split (in California) and ride two to a lane. They get access to the carpool lanes when solo. In the future, we might actually see road use charged by how much road space you take up, and the externalities of the energy you use taxed as well. Both of those give strong incentives to use of a solo car vs. a sedan for any solo voyager.

As noted, while taxis try not to park too much, the much lower parking cost for solo vehicles keeps their cost even lower.

Customers want to be served quickly, which means they broadly want the closest vehicle to come get them. When a fleet is large, there will be a wide pool of vehicles nearby, making it possible to usually assign the "right sized" vehicle to a trip. That means that solo customers get a solo car, pairs get a dual-seat car and 3-4 passengers get a sedan. Larger groups get a van. 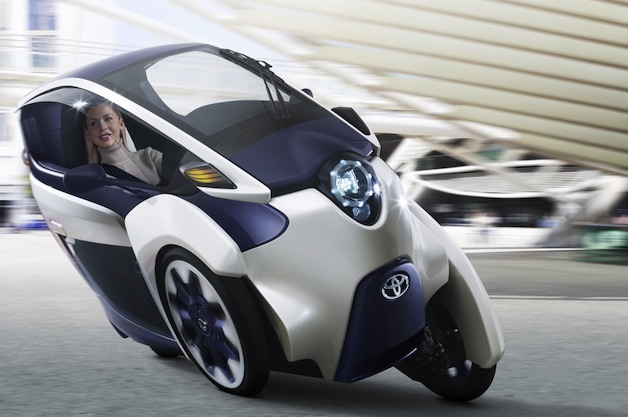 You can, however, server a 1-2 people with a sedan or even a van. It's inefficient, but as long as it's done rarely enough it can be the best way to allocate the fleet. In particular, in can be more efficient to offer a nearby sedan than to bring the right vehicle from far away.

You can also serve small groups with several solo cars. That is not efficient, and they don't get a social experience, so they would need to approve it, but it would be done at no extra cost to them. Many groups of 2-3 people would accept getting 2 or 3 solo cars if it made the wait shorter.

As such, there is pressure to build a fleet that fairly closely matches the distribution of driving. While 80% of trips are solo, 80% of miles are not because the non-solo trips are longer on average. But whatever the distribution is, the distribution of vehicles should not be too far from it. Because you can server a solo passenger with a sedan without complaint, the fleet will be slightly weighted to larger cars, but not too much.

Today's electric sedans use about 200-240 watt-hours/mile. Solo vehicles should be able to do under 100. There are low speed solo vehicles which can't go on the highway that can do much better. Something that is essentially an enclosed electric tricycle can do 20 watt-hours/mile. If we are very keen on high efficiency, as the roads get safer we could see this type of usage for short urban trips.

Because the sedans are not sent for solo passengers, and will always carry 3-4 people, they also do well -- about 60 watt-hours per passenger mile.

The upshot of this is, for the robotaxi user, very efficient energy usage, and thus very low emissions. For example, the Swiss Rail system uses 206 wh/pax-mile nationally, while the urban trains of Basel use 62 wh/pax-mile. Yes, small vehicle transportation will be more efficient than highly utilized European public transit. (I go into more detail on why small vehicles are more efficient than large ones in other articles.) Current US transit trains (subway and light rail) use 700 wh/pax-mile, but many of them are diesel powered. (The electric ones are about 225 wh/pax-mile.) They are an order of magnitude less green than small vehicle electric robotaxis.

While VMT will go up, the robotaxi fleet is so efficient that it is highly misleading to claim that adoption of this technology will result in increased emissions. There is some risk of that from increased use of automated private gasoline powered vehicles. These vehicles will be expensive in comparison to robotaxi travel, and only offer moderate benefits, so it should be possible to keep this in check.

How far will a robotaxi drive in a day?
Is it likely that it will need to recharge more than daily?
If it does then it's most likely its recharge will occur in the morning after the commute.
In fact the majority could recharge in the middle of te day when solar is at its most intense, reducing the need for grid storage and presumably the cost of the electricity.
Of course there is the evening commute, which means recharge overnight.
Battery swap would one way to ensure that as much of the energy as possible is drawn from the grid when charge is cheap and hopefully solar.
That would be offest against the extra capital cost of the batteries.
One other advantage of battery swap would be the reduced need for range, reducing mass with all the benefits you outlined.

taxis are still running for much of the day. Personal cars are not at home during the day if they did a commute.

Battery swap can work, but is not without significant cost especially for a private home. Taxi fleets may well use it.