What is the optimum group vehicle size?

My recent article on a future vision for public transit drew some ire by those who viewed it as anti-transit. Instead, the article broke with transit orthodoxy by suggesting that smaller vehicles (including cars and single person pods) might produce more efficient transit than big vehicles. Transitophiles love big vehicles for reasons beyond their potential efficiency, so it's a hard sell.

Let's look at the factors which determine what vehicle size makes the best transit.

Before the robocar future arrives, vehicle size is partly dominated by the need for drivers. Consider a bus route which could have one 40 person bus every 30 minutes or a 20 person bus every 15 minutes. The smaller vehicles have the same capacity, and but they will use a little more energy, a little more road space and cost somewhat more to buy. This leads to the intuition that bigger must be better.

At the same time the smaller vehicles need twice as many drivers. Labour is more than half the operating budget of many transit agencies. Look at the Chicago Transit Authority and you see labour listed as 69% -- and much labour is actually in other subcontractor categories -- while fuel and electricity are only 7% -- the capital costs like vehicles are not even included here. Needing twice the drivers dominates the equation.

Riders of course would have an easy time deciding. They would of course love having vehicles every 15 minutes! Indeed they would be very pleased to get a 7 person van every 5 minutes if they could, the difference would be qualitative, not just quantitative, because when you get to that frequency you start thinking about it more like a car. In addition, the 2 small vehicles do about 1/8th the damage to the road as the one large vehicle. 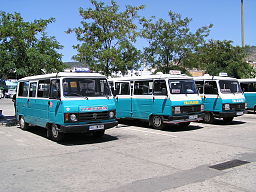 Taking the cost of drivers out, what is the optimum size? More to the point, what provides the optimum balance between rider demand (which would love more frequent service in smaller vehicles) and efficiency (which pushes for larger vehicles, up to a point?) In particular, more smaller vehicles does not just have to mean more frequent service on one route, it can also mean more routes. More routes can both mean getting places you could not get to before, and also getting there faster because you don't need as many transfers.

Here's where big vehicles are better:

Here are some of the advantages of more, smaller vehicles

The ideal situation would be to send out a fleet of 40 or even 60 person buses at the peak of rush hour, and then put those in garages, and send out small buses during the off-peak takes and just cars in the off-off-peak times like the night. Have every vehicle run as close to full as possible and you get your greatest efficiency. This is not an option for a few reasons:

In the robocar world, they will be able to call upon a large fleet of small vehicles (cars for 1-4 people) at all times and they won't need to own them. But the transit companies and agencies still must own these larger (8 to 60) person vehicles.

In some cities, it may be practical to keep a fleet of large vehicles for use only at rush hour. In fact, that's what some commuter train lines use, and they are the most efficient transportation lines in the USA. The rush-hour-only commuter trains run full out to the suburbs, spend the night in the suburbs and run full back into town. That's really efficient. The commuter trains with daytime service are not nearly as good. Train lines that can drop cars off-peak get a win here as well.

How practical it is depends on how long you need the big bus to last. Transit vehicles tend to be robust, heavy and expensive, and they are well maintained to maximize their lifetime. A bus that only works rush hour will last more years than one that works all day. The problem is it may last too many years, to the point that it becomes obsolete or wears out from time rather than just miles. Leaving vehicles idle also means tying up capital for longer, so even if you find a good schedule for depreciation of the vehicles, the cost of money makes it difficult to have two or three different fleets.

So in the end, cities have to choose. Because of the labour cost of drivers, they almost always choose the bigger vehicles. Without that cost, the advantages of the smaller vehicles win out because of the variability of load. If the line regularly runs low-load vehicles, it has chosen a size that is larger than optimal.

This is all general analysis. The next step I would like to see from the transportation research community is to build these models with the actual numbers from real transit systems. For each city, for each route, the optimal size will be different. And of course, the existence of the robocars will change demand, which also changes load. They can change demand down (by being a superior solution) or up (by making it easier to get to the shared vehicle.) They can also replace the big vehicles entirely at off-peak times. That sounds like competition, but it actually can be enabling. One reason transit agencies run their big vehicles all day long (erasing their efficiency) is that riders want assurance they can come in at rush hour and then decide to leave early or late. Thus there has to be off-peak service. If riders can be assured that something else (like a robotic taxi or even an Uber) can get them home inexpensively off-peak, they are more willing to take the transit in.

Indeed, it could make sense for transit agencies to say, "we will have low service after 8pm, but if you can show you rode with us in the morning, we will subsidize a private car for you after hours 10 times a month." They might actually save money by offering this rather than running a mostly empty bus.

In Europe some cities have 'bendy-buses'. These are longer single-deck buses which bend in the middle to help cornering.
https://en.wikipedia.org/wiki/Articulated_bus
It should be possible to have a small bus at off-peak times and clip on an extension at peak times.
Another variable for you!

They have those all over

But they are a classic example of "drivers are expensive" in most cases, in that they are expensive and complex but they only take one driver to carry a lot of passengers.

I routinely ride the bus when it has 5 people out of a capacity of 60 and it goes 30 miles: terribly inefficient.

Another inefficiency is customization. The bus drops me off quite far from where I need to be and it takes a route often full of traffic. With SDCs, you will get very close to where you need to go and it will re-route itself to the fastest route. This means traffic gets better for everyone else, too, since so many riders are diverted to low-traffic routes and alleviate blockages elsewhere.

Finally, look at the way the Google accident occurred. Huge buses are not known for friendly and totally safe driving, especially in my small East-Coast city where there are many tight corners and small roads.

I have wondered if there

I have wondered if there should be a Pigovian tax on vehicle weight to act, this seemed sensible to me in my naive view that the road damage would be proportional to vehicle weight... but you from what you wrote the damage is to the 4th power! Another side effect is that if you lowered the distribution of weight across the vehicle spectrum accidents would be less damaging.

According to weight. But not quite in proper proportion.

I do not consider it above, but I suspect that robotic driving might offer us the potential to put many axles on a big vehicle, each wheel computer-steered so that the vehicle can still be as nimble in spite of having all those axles. That would reduce the road damage of heavy vehicles, in theory quite a bit.

I also think the big win

I also think the big win will be single person vehicles that can go two abreast in a standard lane. With the automation they should also be able pack closer together greatly increasing density ovre the stadard 4 seat car. It would be interesting to know the density threshold they would have to reach to start really improving traffic flow.