There have been few postings this month since I took the time to enjoy a holiday in New Zealand around speaking at the SingularityU New Zealand summit in Christchurch. The night before the summit, we enjoyed a 7.8 earthquake not so far from Christchurch, whose downtown was over 2/3 demolished after quakes in 2010 and 2011. On the 11th floor of the hotel, it was a disturbing nailbiter of swaying back and forth for over 2 minutes -- but of course swaying is what the building is supposed to do; that means it's working. The shocks were rolling, not violent, and in fact we got more violent jolts from aftershocks a week later when we went to Picton.

While driving around that region, we encountered this classic earthquake scene on the road: 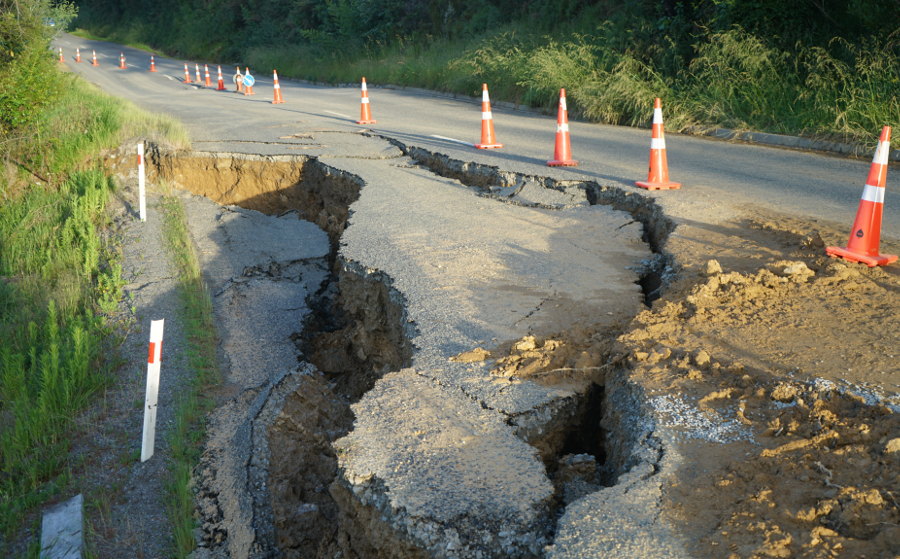 There were many like this, and in fact the main highway of the South Island was destroyed long-term not too far away, cutting off several towns. A scene like this makes you wonder just what a robocar would do in such situations. I already answered this question in a blog post on how to handle a tsunami. Fortunately there was only a mild tsunami for this quake. A tsunami will result in a warning in the rich world, and the car will know the elevation map of the roads and know how to get to high ground. In some places, like Japan,t here is also an advanced earthquake warning system that tells you quakes are coming well before they hit you, since electrons go much faster than seismic waves. With such a system, robocars should receive a warning and come to a stop unless they need to evacuate a tsunami zone. Without such a warning, we still could imagine the road cracking and collapsing in front of you as might have happened on this road. Of course the cones and signs that warned me days later would not be present.

The answer again lies in the fact that pictures like mine will be used to create situations like this in simulator, and all car developers will be able to test their systems with simulated quake damage to make sure they do the right thing. I've spoken since 2010 on the value of a shared simulator environment and I think if government agencies like NHTSA want to really help development, providing funding and tools for such an environment would be a good step. NHTSA's proposal that all developers share their logs of all incidents would clearly make such a simulator better, but there is pushback because of the proprietary value of those logs. When it comes to strange situations like earthquakes, I doubt there would be much pushback on having an open and shared simulator environment.

New Zealand's government is taking a very welcoming approach to robocars. They are not regulating for a while, and have invited developers to come and test. They have even said it's OK to test unmanned vehicles under some fairly simple rules. NZ does not have any auto industry, and of course it's quite remote, but we'll see if they can attract developers to come test. Their roads feature something you don't see much in the USA -- tons and tons of one-lane bridges and other one-lane stretches of highway. Turns out that robocars, with a little bit of communication, can make very superhumanly efficient use of one-lane two-way roads, and it might be worth exploring.

Speaking of Open, today Comma.ai, which previously had declared they were giving up on their neural network autopilot due to NHTSA threats today announced they have open sourced their software, along with hardware designs and case designs. NHTSA did not want them making an autopilot, and said they could not simply rely on the fact that drivers were told they must be diligent, it will be very interesting to see how NHTSA reacts to the release of open designs that anybody can then install on their car.

The automotive industry has had a long history of valuing the tinkerer. All the big car companies had their beginnings with small tinkerers and inventors. Some even died in the very machines they were inventing. These beginnings have allowed people to do all sorts of playing around in their garages with new car ideas, without government oversight, in spite of the risk to themselves and even others on the road. If a mechanic wants to charge you for working on your car, they must be licenced, but you are free to work on it yourself with no licence, and even build experimental cars. You just can't sell them. And even those rights have been eroded.

Clearly far fewer people will have the inclination to build an autopilot using the comma.ai tools by themselves. But it won't be that hard to do, and they can make it easier with time, too. One could even imagine a car which already had the necessary hardware, so that you only needed to download software to make it happen.

In recent times, there has been a strong effort to prevent people with tinkering with their cars, even in software. One common area of controversy has been around engine tuning. Engine tuning is regulated by the EPA to keep emissions low. Car vendors have to show they have done this -- and they can't program their car to give good emissions only on the test while getting better performance off the test as VW did. But owners have been known to want to make such modifications. Now we will see modifications that affect not just emissions but safety. Car companies don't want to be responsible if you modify the code in your car and there is an accident involving both their code and yours. As such, they will try to secure their car systems so you can't change them, and the government may help them or even insist on it. When you add computer security risks to the mix -- who can certify the modified car can't be taken over and used as a weapon? -- it will get even more fun.

I will also point out that I suspect that comma's approach would not know what to do about the collapsed road, because it would never have been trained in that situation. It might, however, simply sound an alert and kick out, not being able to find the lane any more.

Regular readers will have seen my strong critique of the NHTSA rules. The other major news during my break was the pushback from major players in the public comment on the regulations. In some ways the regulations didn't do enough to give vendors the certainty they need to make their plans. At the same time, they were criticsed for not giving enough flexibility to vendors. In addition, as expected, they resist giving up their proprietary data in the proposed forced sharing. I predict continued ambivalence on the regulations. Big players actually like having lots of regulations, because big players know how to deal with that and small players don't.

Once in NZ I crossed a one-lane bridge shared with a railroad. So I'm wondering what a robocar will do if sees a train coming.

They are still there

I crossed one which also was a railroad track. In this case, it would clearly be on the map that it's also a railroad crossing, and the team would write special code to both look for the signals (I think there were signals) and for the trains.

We crossed the very long one lane bridge at Haast. It is long enough that it has 2 or 3 crossing spots in the middle, where it gets wider, so two people can enter the bridge together and pass at one of these spots. People are not as good at handling what to do with those. In the future, I think that this is one of the cases where some connection infrastructure could make sense. Cell towers should be installed (a small cost compared to a bridge retrofit) so that cars can ask a server for timing slots that cross the bridge just right to avoid other traffic, or to get to the passing spots at the right time.

In fact, I think it would be an interesting idea for new residential development to make the residential streets all be one-way with occasional wide spots. They should be back alleys, with only sidewalks and bike paths in front of the houses. When you car wants to go to your house, it would see on the map that it should ask for a reservation spot, and then it can take the one-lane road in either direction, with only very minor delays -- but close to half the construction cost.

Some posibilities.
1)The authorities needs to make regulations, because they are afraid to be guilty if something terrible (a robocar pushing a school bus to the abyss) , happens. Once they learn something about RC, regulations will change. What goverment try to avoid is a RC running without approval, and cannot approve something that they do not know which test must pass.
2) Unfortunately, it is more important to decide who is guilty and and must pay,than to make the things to work fine, with near zero risk.

I will not comment about mostly regulations because many has no sense. Agree with you, Brad.