No, your dashboards and streets don't get all fancy

Yesterday I attended the "Silicon Valley reinvents the wheel" conference by the Western Automotive Journalists which had a variety of talks and demonstrations of new car technology.

Now that robocars have hit the top of the "Gartner Hype Cycle" for 2015, everybody is really piling on, hoping to see what's good for their industry due to the robocar. And of course, there is a great deal of good, but not for several industries.

Let me break down some potential misconceptions if my predictions are true:

The dashboard of the modern car is amazing and expensive. Multiple digital screens and lots of buttons and interfaces on the wheel, the central stack and beyond. Fancy navigation systems, audio and infotainment systems, mobile apps, phone integration, car information and much more can be found there. There have been experiments with gesture and speech based controls, concierge services and fancy experimental controls. There are video screens in the headrests for the rear passengers. In recent years, specialized offerings like Ford Sync, GM OnStar and many others have become differentiating factors in cars, and there's a lot of money in that dashboard. 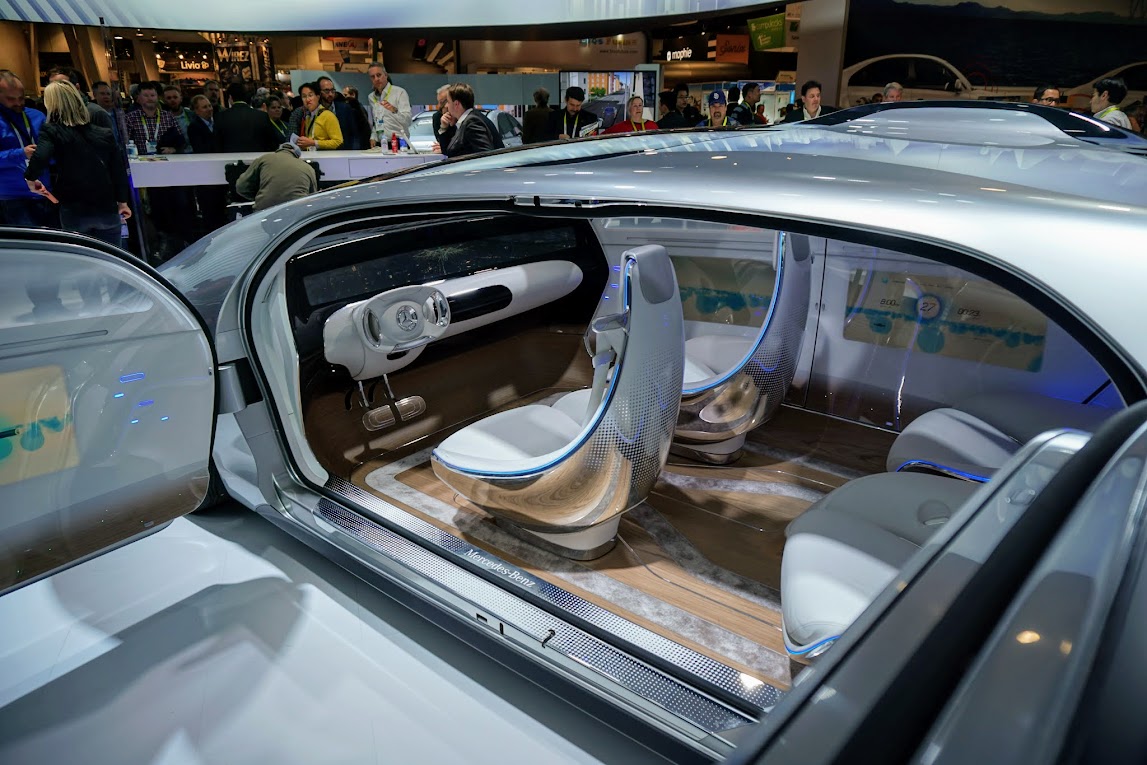 This started changing a bit as car companies came to accept the dominance of the mobile phone in the driver's life. People stopped wanting things like navigation and music from their car. They had better versions of those things in their phone, and they knew how to use them and had customized them. This year we are seeing deployment of "Android Auto" and "Apple CarPlay" which connect your phone to the car's dashboard screen, and let you see and control a very limited number of apps on the screen. The car makers had to be dragged to this kicking and screaming, but frankly today's offerings from both Google and Apple are fairly poor in this department. For example, you can only run the special approved and modified apps. If you like to navigate with Waze instead of Google Maps (even though Waze is a Google product) you can't -- your phone is locked out when it is driving Android Auto.

All of this is still based on the the idea that the driver must put all focus on driving. You can't have complex UI where you look at the screen for more than a glance, and you should not distract the driver.

The Mercedes F015 concept car shown here is one of the first automaker explorations of a car where it's OK to distract the driver. On the doors and walls of this car, you can see large touchscreens with concept apps on them.

In contrast, Google's new prototype 2-seater car barely has a dashboard at all. Their answer shows more wisdom, I think. Your phone and tablet are always going to be your preferred choice for mobile computer interactions. Access to the internet, music and entertainment will go through them. The phone is updated every 2 years, or even less, and will always have superior hardware and services, and more effort goes into its design and the design of its systems and apps than will go into a car system. But even if the car system is fantastic, 2 years later it will be behind the phone.

As such, the phone is even how you give commands to the car, such as what destination to drive to. And we all know it's vastly easier to enter destinations on phones than in any car nav system we've ever seen.

The full-auto robocar becomes more like a living space than a car. More like your TV room or your office. It is those places where we might seek clues as to the interior of the car. My living spaces do not have touchscreens on all the walls, for example, so it's not too likely my car will either -- or if they become useful, both will have them.

In my office I do have a desk and a big screen, along with better user input devices (full keyboard and trackball) as well as more computing power. These things I will want in my car, but of course they should personalize to me, probably using my phone as a gateway to that information. In my TV room I do have a large screen, and that will probably show up in the car, but it probably won't be a touchscreen any more than my TV is. I will control it from my phone.

Car makers agreed that they should not attempt to pioneer new forms of user interface, and that this is why experiments in gesture control and other novel UIs have not done well. Drivers don't want to learn entirely new styles of computer interaction when sitting in a car. They want to use the forms they already know. New forms should be pioneered in the general computing world, and moved into the car.

With so much dependence on the phone, the car will need a small and simple tethered phone so that if your phone is not present for some reason, you can still do all the basic functions. Of course there will be power so running out of battery is not an issue, other than for unlocking and summoning the car.

We also have to realize that long ago, car dashboards had barely anything on them. Even emergency driving (when the self-drive system has failed, and you plug in handlebars or a joystick) hardly needs anything more than a speedometer, and frankly you can drive fine with other traffic even without that.

It should be noted that the phone is not a secure device. As such, it won't send much to the self-driving system. It will receive status information from it, but only give very limited commands. Indeed, it is quite possible that your phone might control your car through the cloud, sending commands to a central server which then talks to the car. A more simplified interface must exist for cloud dead zones, with all its traffic highly scrutinized. Robocars will be able to drive without the cloud, but it will be the exception, not the rule, and it won't be done for very long or far.

A lot of the event dealt with audio. Audio makers are making good strides in producing fantastic car audio, and doing it at high prices. This trend started when it became clear that the car was the primary place to listen to music for many people, though this has decreased with the rise of the smartphone and other good music players.

People will continue to want good audio systems in their cars, but they will be offered a new, and cheaper option thanks to robocars, namely quality noise-canceling headphones with subwoofer seats. Today, drivers are not allowed to wear noise isolating headphones because they should respond to traffic sounds and sirens. In the future, drivers might like to take themselves away from road noise to get good music. Aside from being cheaper, this solution allows all occupants of a car to have different music (or video soundtrack) if they wish to.

Last weekend I tried out a new product called a SubPac, which is a small seat cushion which emits strong subwoofer bass directly into your body, providing a fair bit of the feeling of standing in from of giant dance club speakers. This unit is $380 today but will come down in price and soon should be a modest extra cost in car seats. (I am also interested in backpack versions which will eventually make silent disco more acceptable to those who crave mind-numbing bass.

In the other direction, the freedom of design that robocars provide means that larger vehicles will become interesting spaces, and you might come to view the car parked in your driveway as your music listening room or even home theatre and video game room, and invest the money in that (if you own your robocar)

Results from a design competition at Academy of Art University of San Francisco were presented. The designs were interesting, in line with many other futuristic car designs I have seen, though larger and with more lounging. Sadly, the focus was on large vehicles. The reality, I think, is that most new vehicles will be small 1-2 person vehicles, and I would like to see more radical design ideas there. Around 80% of urban trips are solo, and we have a tremendous opportunity to design comfortable higher end solo vehicles which will also be very efficient in terms of both energy and road space occupancy. Here's where we want to see adjustable comfortable chairs, fold out desks and screens and other techniques to give us the things from our offices and homes in a space just 1.5m wide.

The concept of infrastructure changes were touched on. Regular readers here will know I instead favour minimal infrastructure change and the idea of "virtual infrastructure," where as much is done at software levels as possible. "Smart cars on stupid roads." In spite of this cities and agencies commonly ask what they should do to hasten the robocar, and I love the sentiment but the reality is that the answers are minimal.

All of this takes us further towards the conclusion that some models of robocar in the future will be incredibly cheap. Particularly the "city cars" which never go on the highway and only carry 1-2 people. With simple electric drivetrains they will be easy to build and maintain, and eventually their battery cost will become very reasonable. The dashboard vanishes along with many other controls. The expensive sound system vanishes. The windshields need not be a large custom piece of curved glass -- in fact they don't even have to exist other than for passenger comfort. The parts count goes down significantly. The only additions are the sensors and computers, both on Moore's law downward curves, and perhaps that nice large screen for working. We may also see a more advanced computer-controlled suspension to keep the ride smooth and comfortable.

That vehicle has windows, but tinted. Some designs, like the Zoox, imagine not even having front or rear windows, but I think that would bother the occupants, many of whom need to see forward to avoid getting a bit queasy. Of course, nobody has really worked to figure out if they can fix the queasy with other things, like screens inside the car, or cues, or better suspension.

Today's cars need a big expensive windshield as the driver must get a wide view. It also has to protect you in a crash. Much easier to do if you can do an array of windows, though not as nice a view. Futurists like drawing cars with bubbles on top, which would be cool, but not super safe.

Here is the best of car

Here is the best of car interior design with include all think. thanks for share this.