Robocars and Ultracapacitors (and other energy sources)

A reader recently asked about the synergies between robocars and ultracapacitors/supercapacitors. It turns out they are not what you would expect, and it teaches some of the surprising lessons of robocars.

Ultracaps are electrical storage devices, like batteries, which can be charged and discharged very, very quickly. That makes them interesting for electric cars, because slow charging is the bane of electric cars. They also tend to support a very large number of charge and discharge cycles -- they don't wear out the way batteries do. Where you might get 1,000 or so cycles from a good battery, you could see several tens of thousands from an ultracap.

Today, ultracaps cost a lot more than batteries. LIon batteries (like in the Tesla and almost everything else) are at $500/kwh of capacity and falling fast -- some forecast it will be $200 in just a few years, and it's already cheaper in the Tesla. Ultracaps are $2,500 to $5,000 per kwh, though people are working to shrink that.

They are also bigger and heavier. They are cited as just 10 wh/kg and on their way to 20 wh/kg. That's really heavy -- LIon are an order of magnitude better at 120 wh/kg and also improving.

So with the Ultracap, you are paying a lot of money and a lot of weight to get a super-fast recharge. It's so much money that you could never justify it if not for the huge number of cycles. That's because there are two big money numbers on a battery -- the $/kwh of capacity -- which means range -- and the lifetime $/kwh, which affects your economics. Lifetime $/kwh is actually quite important but mostly ignored because people are so focused on range. An ultracap, at 5x the cost but 10x or 20x the cycles actually wins out on lifetime $/kwh. That means that while it will be short range, if you have a vehicle which is doing tons of short trips between places it can quickly recharge, the ultracap can win on lifetime cost, and on wasted recharging time, since it can recharge in seconds, not hours. That's why one potential application is the shuttle bus, which goes a mile between stops and recharges in a short time at every stop. 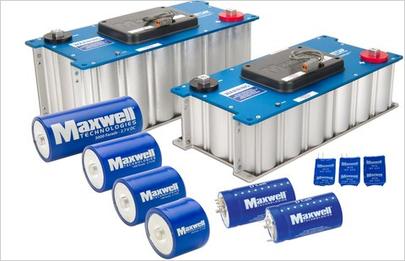 How do robocars change the equation? In some ways it's positive, but mostly it's not.

Now we see the bad news for the ultracap. It's main advantage is the fast recharge time. Robots don't care about that much at all. Instead, the fleet manager does care about the downtime, but the cost of the downtime is not that high. You need more vehicles the more downtime you have during peak loads, but as vehicles are wearing out by the km, not the year, the only costs for having more vehicles are the interest rate and the storage (parking) cost.

The interest cost is very low today. Consider a $20,000 vehicle. At 3%, you're paying $1.60 per day in interest. So 4 hours of recharge downtime (only at peak times when you need every vehicle) doesn't cost very much, certainly not as much as the extra cost of an ultracap. The cost of parking is actually much more, but will be quite low in the beginning because these vehicles can park wherever they can get the best rate and the best rate is usually zero somewhere not too far away. That may change in time, to around $2/day for surface parking of mini-vehicles, but free for now in most places.

In addition to the high cost, the ultracap comes with two other big downsides. The first is the weight and bulk. Especially when a vehicle is small and is mostly battery, adding 200kg of battery actually backfires, and you get diminishing returns on adding more in such vehicles. The other big downside is the short range. Even with the fast recharge time, you would have to limit these vehicles to doing only short cab hops in urban spaces of just a few miles, sending them off after just a few rides to get a recharge.

Finally, while ultracaps don't wear out very fast, they might still depreciate quickly the same way your computer does -- because the technology keeps improving. So while your ultracap might last 20 years, you won't want it any more compared to the cheaper, lighter, higher capacity one you can buy in the future. It can still work somewhere, like grid storage, but probably not in your car.

The fact that robocars don't need fast refueling in convenient locations opens up all sorts of energy options. Natural gas, hydrogen, special biofuels and electricity all become practical even with gasoline's 100 year headstart when it comes to deployment and infrastructure, and even sometimes in competition with gasoline's incredible convenience and energy density. But what the robocar brings is not always a boon to every different form of energy storage.

One technique that makes sense for robocars (and taxis) is battery swap. Battery swap was a big failure for human driven cars, for reasons I have outlined in other posts. But robocars and taxis don't mind coming back to a central station, or even making an appointment for a very specific time to do their swap. They don't even mind waiting for other cars to get their swaps, and can put themselves into the swap station when told to -- very precisely if needed. Here it's a question of whether it's cheaper to swap or just pay the interest and parking on more cars.

Ultracaps are also used to help with regenerative braking, since they can soak up power from hard regenerative braking faster than batteries. That's mostly not a robocar issue, though in general robocars will brake less hard and accelerate less quickly -- trying to give a smooth ride to their passengers rather than an exciting one -- so this has less importance there too.

Still, for convenience, the first robocars will probably be gasoline and electric.

First of all thank you very much for this interesting response.
Here my comments:

1 – One ultra-fast supercharger is enough for 60+ robocars (as the charging is ultra-fast). So the incremental cost per robocar is a fraction (1/60) of the investment.

2 – As the charging is ultra-fast, having a range of only 20 km isn’t a problem for urban commutes (huge market). And not a big problem for trips over 100 km: just 4 x 1 minute automatic pauses. 20 minutes every 500 kilometers isn’t bad. That’s faster than with Tesla.

4 – I sure you know it: Shaï Agassi (ex-BetterPlace) is currently working about e-selfdriving PODs in London (“Newrgy”)…Will it be in synergy with the BetterPlace technology (swap stations) ? I’m not convinced that this technology (wich needs also fast chargers on the backstage if we want fast battery-swap) is more interesting than an ultra-fast supercaps supercharger network. https://www.blue-solutions.com/les-applications/mobilite/vehicules-electriques/bluetram/

6 – Probably the most important point in an sustainable development perspective: Skeleton Ultracaps are made of carbone (“curved grapheme”) = high biodegradability, and abundant resource (Cobalt crust, on the oceanic volcanos, = huge reservoirs but not so easy to exploit it).

I have not seen much news come out of Newrgy, only the briefest mention of pods.

One supercharger can handle more cars per hour of course, but they still are expensive to build and thus you have to go further to find one when you need one. Not you personally, but the car -- but that cuts off the range.

That's why you see this in bus applications, as you can put chargers along a fixed route. Only buses have fixed routes.

My point is, the ultracaps will have to save money or have other advantages, regardless of their charging rate to be a win.

The Bolloré « BlueTram » (French technology, link above) have a 2 km range, with a 5 Wh/kg density. It’ not necessary to have a higher range in this case with bus-stop every kilometre or less. They also have a boat with this technology: http://www.supercondensateur.com/bateau-electrique-a-supercondensateur-ar-vag-tredan

Changing the robocars lithium batteries every 1-2 years could lead to some recycling problems. If we have for example a recycling rate of 80% for Cobalt (Tesla Lithium battery Technology), and a recycling process every year, in 3 years we only have half of the initial Cobalt. In six years just a quarter. Etc. (a second life for batteries with stationary storage doest change anything for the first life needs in robocars). The PNUE estimation is 68% recycling rate for Cobalt: http://www.mineralinfo.fr/sites/default/files/upload/documents/Plaquettes/rp-63626-fr-cobalt.pdf (page 10)

That’s the reason why focusing on graphene (carbon) technologies (10-15 years supercap-robocars), abundant and fully biodegradable, makes a lot of sense in a sustainable perspective.

Chip Register, CEO of Sapient Consulting:
"(...) while Tesla may win some of the early battles, thanks to its flashy marketing, it won’t win the war armed with lithium-ion batteries. Real innovation is needed to take battery storage to the next level and for that investors would be wise to bet on the smaller and more innovative companies on the battlefield (...)" (Forbes)

Ultracaps offer much faster recharge, and longer lifetime (provided they don't become obsolete, a very high risk with any quick changing tech) but at the large cost of weight, volume and dollars.

If they fix that high cost of weight, volume and dollars they obviously win and everybody will switch to them for all applications.

A 10km range is cutting it pretty fine for an urban trip vehicle unless you have excellent distribution of very-high-power recharge stations, because if you have to go 2km out of your way to get to the recharge point you have used up 40% of your range! However, with a large density of stations -- it is no small order to put in a station with hundreds of kw -- 10km range could serve a reasonable number of trips.

Another minor point - battery based systems, including large batteries and battery swap, often make use of off-peak night power, while ultracaps must use almost entirely daytime power. As noted, hybrid approaches might work best for a while.

Thank you for this conversation

I mainly agree with you,

In a pure market perspective, during the transitional period lithium batteries are better.

Thank you for this instructive conversation and your time, and keep in touch ;)
Have a nice week-end.