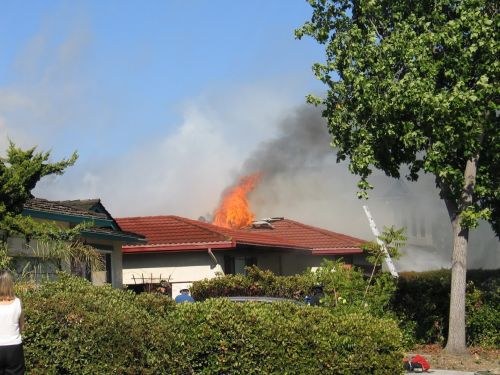 It should be possible to build a rescue vehicle which can withstand a great amount of fire for a short time. As a vehicle, it would not stay in fire, but would drive through burning and dangerous areas quickly. It would have air tanks, filters and everything else you would need. Some might have tracks to go down debris filled streets, but in these cases we've seen streets that could be driven if not for the burning all around. Some military vehicles, such as APCs, might already be suitable with modest modification.

There are 3 options for such vehicles. They could be crewed, remote piloted, or autonomous.

Crewed vehicles of course are flexible and the crew can help rescue people from buildings and search for them. Many of the deaths are elderly people who could not get out of homes on their own. The crew take up seats, however, and also put their lives at risk to enter the fire zone.

Remote control or autonomous could make sense when a specific trapped victim has been identified, typically by talking to them on their cell phone. If they can get to the driveway, such a vehicle could arrive to get them out. No reason not to send them in if there's any chance, even if the trip is obviously dangerous.

Of potential interest are the fleets that will be coming in a decade or so of "flying cars." It is hoped that we'll have hundreds of thousands of these in typical cities. Autonomous and capable of ranges of 30 to 80 miles.

These cars offer an interesting potential in big disasters. You could deploy tens of thousands of them to pick up people in minutes, as long as it is safe to land and take off at their location, and those vehicles could probably do 2-3 such runs before needing recharge. They could also bring rescue crews in to get people out of buildings and to designated landing pads.

Of course, certain situations would involve winds that make use of such vehicles difficult. Difficult is not impossible, though. A vehicle might be rated for 25mph winds. That doesn't mean it crashes all the time at 40mph, just that it is no longer at the full safety level you want for daily commuting use, which is closer to 99.99999%. If you're going to die if you don't get out, you will still accept a lower safety level.

Of course you should also get out as many people as possible on the ground, but if you try to do too much of that you just get clogged roads. There, carpooling apps provide a solution to maximize throughput on the roads, though they have issues when people are desperate, and you have to decide if people can bring large pets at the cost of a seat for a person.

In many cases with wildfire, the issue is that the way out is blocked on the ground. Flying vehicles may be a great option there. Those who live in wooded hills always consider if there is only one way out of their place. In the future, as long as there is a landing pad, there will always be other ways out.

Still, the ability to take tends of thousands of people out of a danger zone in minutes no matter what the condition of roads is a new capability the world has not had before.

Yes, autonomous land and air vehicles will greatly improve evacuation capabilities, but revisions to building codes in hazard zones should encourage or require better survivability of new construction. Heck, just tile roofs, stucco walls, and fire shutters would have let most of the houses in Paradise survive the fast-moving fire. (Many houses catch fire from near-IR heat from the surrounding flames igniting curtains and furnishings inside the house, and a simple reflective shutter would save a lot of structures.)

The main problem I see is time. If a wildfire is moving so fast that people can't evacuate themselves, how can a vehicle like this get to them fast enough to make a difference? The West is a really big place. How many of these would you need and where would you stage them?

In the areas prone to tornados, many houses have storm rooms or other storm shelters. Maybe it's time the west starts thinking about building structures that include fire shelters.

The cost of a fire shelter

The cost of a fire shelter in every home, or even every other home, vastly dwarfs the cost of having a few fire rescue vehicles per area.