Announcing delivery robots from Starship Technologies (with yours truly)

I'm pleased to announce today the unveiling of a new self-driving vehicle company with which I am involved, not building self-driving cars, but instead small delivery robots which are going to change the face of retailing and last-mile delivery and logistics.

Starship Technologies comes out of Europe, created by two of the founders of Skype, Janus Friis and Ahti Heinla who is CEO. The mission is similar to the vision I laid out in 2007 for the Deliverbot -- the self-driving box that can get you anything in 30 minutes for under a dollar.

Here is the press release and a simple video and a collection of press and other videos. 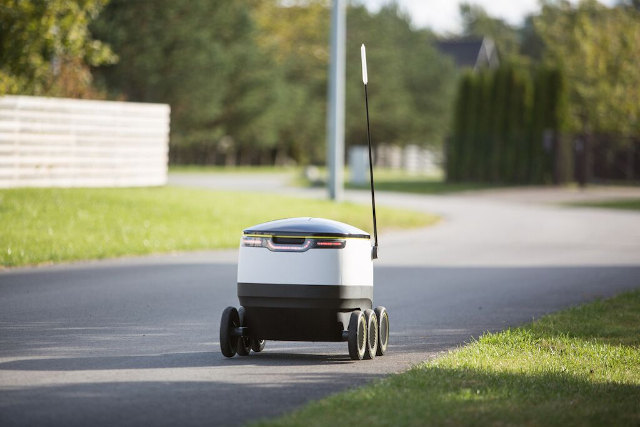 Starship is still in early stages, but will be conducting a pilot project next year in the UK, and another in the USA shortly thereafter. Customers will be able to place online orders and have a robot come to their home immediately or on their schedule.

Why is this possible well before full unmanned self-driving cars can go into public use? There are all sorts of reasons.

How big is the last mile? It's huge. It's not just what today's delivery companies do. Most deliveries are actually made by customers who run out to stores to get stuff. The Starship robot will bring you things in less time than a round-trip shopping trip would take, for less money, and with vastly less energy, pollution, traffic congestion and parking. It's a win for the store, the customer and for society.

It's a really big win for those with disabilities or difficulty moving. The elderly are going to be able to live in their own homes with greater independence even if shopping has become such a chore they were contemplating a senior home.

The robots will eventually create an "internet of parcels" (I guess the term "internet of things" is already in use) where physical goods can move around cities with an ease surpassed only by data. Not only will you be able to buy anything, you'll be able to rent things on short notice too, or borrow them from your neighbours. The sharing economy can be enabled and the meaning of ownership may change. 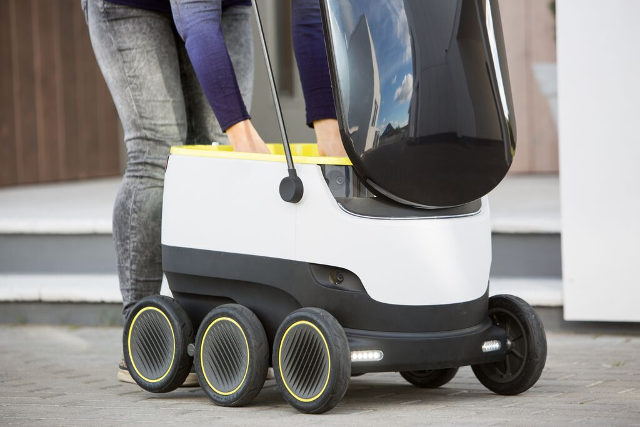 The convenience of robot delivery will surprise people. A common question I get asked is "What does the robot do if you're not home when it delivers?" and my answer is, "why would you want the robot to deliver when you're not home?" Regular delivery run's on a driver's schedule, robotic delivery will run on yours. Robots don't mind waiting either, so you could ask a shop to put 5 pairs of shoes into a robot, and at home you could try them on and put 4 pairs back in the robot and keep the ones you like.

I also expect interesting changes in prepared food. It will be possible to run a "restaurant" inexpensively in a private kitchen and get ingredients and deliver dishes quickly and cheaply with no wastage. A family might even order different dishes from different locations to create a meal.

Nothing is 100% good for everybody -- there will be disruption in the retail industry, and retailers who exist primarily so you can go get things will have trouble competing if they don't embrace this model, but other retailers who are suffering from competition from the online stores may find they can now dominate with fast service.

Of course, there might be competition in the air. Our students at Singularity University were among the first to work on drone delivery with the Matternet project which is beginning a trial delivering for the post office on the steep slopes of Switzerland. Both methods face legal challenges, and both have their advantages. Drones will be faster and can cover unusual terrain, while ground robots can carry more with less energy and have an easier time landing. :-) I suspect people will tolerate small robots on their sidewalks more than drones with heavy packages over their heads, but we'll see.

Note that I'm a special advisor to Starship on both technology and business, but this post is written with my own voice, and doesn't speak on behalf of the company.

ISPs also need to solve the last mile. Are you thinking what I'm thinking? That's right! This could be the return of Usenet! Use robo-delivery to deliver tapes between homes. Brad, this could be big!

Though it's hard to get tape drives these days.

In the old days we had a joke:

"Never underestimate the bandwidth of a station wagon full of mag tapes."

Though I think if you did the calculation today, our modern data lines probably easily outdo that station wagon. Now a wagon full of 256gb micro-SD cards, on the other hand...

What about security? How do

What about security? How do you prevent someone from seeing one of those robots, stopping it and taking the contents?

For that matter, what about someone stealing the robot itself?

The robot itself would not function off the network, if you stole it, it would have to be for parts, and our plan is to make the robot low cost. You would not know what package was inside the robot, so you would be doing a felony on camera (streamed back to HQ) for unknown reward. Not what most people would want. Generally, we are going to start in areas where crime is not a big issue.

That's brilliant! No one would ever think to wear a mask or
a disguise!

BTW, what felony? Simple theft is likely to be a misdemeanor,
unless the package is worth a lot of money -- which means it
would be worth it to commit the crime.

It's hard to tell which is the worse idea -- this, or delivery
by drone.

There are lots of areas where masked pirates are not going to be an issue. The robot is worth enough money that stealing or destroying it would be felonious in many areas.

I will tell you what's a bad idea -- the consumption of oil, road space and parking involved in going to the store to get a few things.

Forget people stealing it ..... kids will just tip it over.

Japanese researchers had to program their robot to hide amongst tall people when children went from playing with their robot to abusing it. I suppose we'll need new laws against 'robot teasing'.

I hope its programmed to cower to one side when meeting pedestrians.

Footpaths in the UK can be quite narrow. What happens if it meets a pushchair, double pushchair or wheelchair? The push / wheel chair cannot be forced onto the road, nor, would I expect could the robot, so the robot would need to back up, but how; Without very precise knowledge of its surroundings it would require a human operator to find a wider part of the footpath. However, if humans have to operate / keep an eye on them all the time then surely they cannot be cheaper than a 'normal' postman?

Not all the time

Humans can intervene when there is trouble, but there is mostly not trouble. How often do you encounter a wheelchair? How many minutes out of an hour are you dealing with wheelchairs or other difficult situations? Not that they are all that difficult. The robot will just back up. It knows how wide the road is, knows where driveways and other places it can move aside are. You say "without very precise knowledge of its surroundings" like having precise knowledge of its surroundings is an insurmountable task. Once a robot has cruised a sidewalk once or twice (with extra human help) it will know all about the sidewalk and every feature of it.

I think you will encounter quite a lot of pushchairs and this device will have to give way or backup, possibly for a considerable distance. Will it really 'know' the width of every footpath and the position of every 'passing place' to, let's say, the nearest 30cm? This seems like a lot of work / expense. Plus you have other obstacles to build into any map eg. bins, lamp posts, flower borders, trees, railings and also 'temporary changes' eg. cars parked on kerbs, gas / telephone works, overgrown foliage. Navigating a relatively busy footpath in the uk, without hitting anyone or anything, is going to be a very difficult task and I think you're going to encounter a lot of problems.

How is it going to get up curbs and cross (busy) roads?

That is why it has 6 wheels, to be able to climb most curbs, though most of the areas it will run also have curb cuts.

If the road is that busy, it will have a stop light, and it will cross with the light or walk signal. Or otherwise wait for a long and legal gap -- but mostly it's for suburbs and will not cross busy roads much if at all.

I'm wondering if it really

I'm wondering if it really is supposed to cross streets (safely, of course)? This scenario in my opinion is contradicting with the following statements made in the beginning of the article:

Indeed, you will not pause crossing a street, though you might retreat back to where you came from. But crossing a street is pretty straightforward -- flat, no curbs or grass, wide crosswalks with lots of options. A sensor for traffic signals is just a camera, it's pretty cheap. Crossing where there are no signals is somewhat harder but many solutions in development look promising.

You are assuming that busy roads have pedestrian crossings. That is not always true. But, even if it finds one, how is it going to press the button? Then, how will it know that the lights have turned to stop? You're going to need 'smart / interactive crossings' ..... and that will cost? Alternatively you need a rather 'smart robot'.

Have you considered partnering with singularity and having a drone dropping off your unit? Would solve some challenges both sides.