The last two episodes have offered very little on key show mysteries. This doesn't mean they were not good episodes. The Oath was one of the best of the series for drama. Blood on the Scales was good, but suffered because there was not so much suspense over the outcome. It's still too far from the end to be rid of Adama. I thought the death (and return) of Tigh would have had some interesting consequences but it's not too bad to see him make it through it. The only question was how Gaeta and Zarek would fall. For a while, I was expecting we would see a firing squad scene with Adama, and Gaeta would have instructed his men (in advance) to execute Zarek instead, Zarek being there to witness it. But I'm glad they didn't go this over the top.

In particular I was glad that they also did a more realistic sabotage of the FTL drive. In so many shows, the character would have found his access codes still working, even though he's effectively left the fleet. And in so many SF shows, his simple sabotage of the FTL engine would have had explosive results and spectacular special effects. Instead, the FTL did what any complex computerized machine would do if a part was damaged or removed -- report the fault and shut down. Nicely done.

The sabotage of the FTL turned out to be not needed. Moments later Adama retook the control room, and had the ship jumped he could have jumped it back. Presumably this scene leads us to something else because of the stranding of the Galactica, and the apparent structure damage to the hull in the jump room.

These ships, meant for basic jumping around a close group of colonies, should never have been made so well as to travel 15,000 light years. Perhaps a military-spec ship would be, but it would have been a good touch if the trip to Earth had involved several ships breaking down, forcing the fleet to go back and redistribute their populations into more crowded remaining ships. Simple civilian ships should never have been able to go this far, for this long. The Galactica, while old (and not having jumped in 20 years) would not be the first to fail.

We see Caprica Six, hearing of Saul's death, not taking long to get back in with Baltar, presuming that's her. It does need to be her, as with Ellen's upcoming return, something has to break in that relationship. (Update: Whoops, this is in error. Though we are going to see something about that love triangle, I am sure.)

And of course, the previews for next week show...

Michael Hall has been doing a lot of research on the appearance in the show of real Earth starfields. Here, I write an update to my earlier post.

The last few episodes haven't added a lot for those theorizing on the big mysteries, but they are good plot. But one item at the cliffhanger of tonight's episode does promise something.

(This relates to information from the "scenes from next week" which some view as spoilers.)

I think Saul throws himself on the grenade. This saves Adama. (Mythbusters showed that this can work, and they didn't even use a Cylon version of Buster.)

The biggest raging debate is whether the Earth shown in Sometimes a Great Notion is the only Earth we will see in the show, or if there is another Earth out there, which is the real Earth.

These are Ronald Moore's words, from the podcast, describing the backstory of the show.

This fundamental idea that once upon a time there were was a place called Kobol, the gods and men lived together. Man on kobol stole fire from the gods, that fire was the knowledge of life, how to create life, they created their own cylons. That creation and the destruction of their paradise was the end of kobol.

Here are some screen captures of the poster behind Tyrol in the produce market. You can't really read the words reliably, but in the first two lines, it really seems like the last word is "Cylon" -- though there is some argument for "Colony" 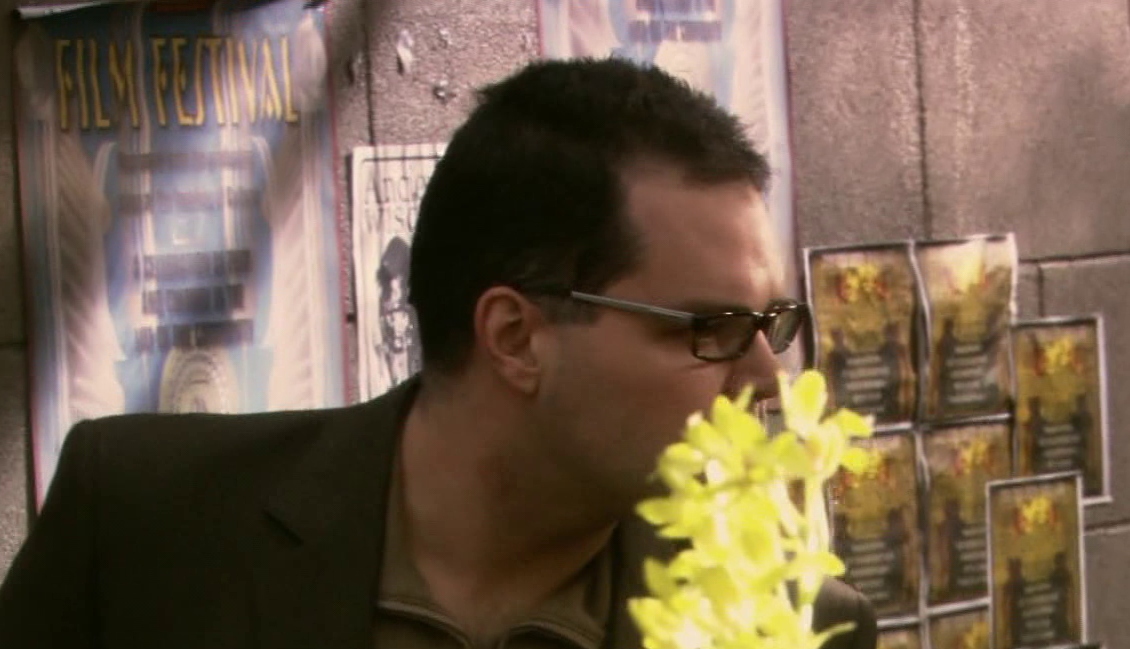 Also look at another part of the poster: 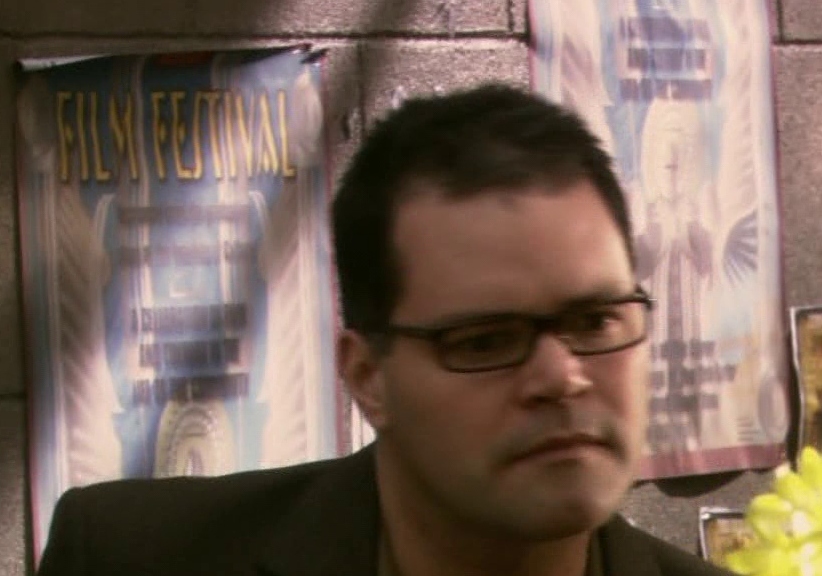 An interview by Maureen Ryan of Ron Moore and others is available on the Chicago Tribune site.

It contains a lot of important information, and some that dashes a number of my hopes.

Well, I have lots to think about that episode. I was pleased (mostly) that my second choice, Ellen Tigh was correct. And in particular that it seems my reason for picking Ellen may be correct -- that the two of them have had a multi-thousand year, on-again, off-again romance. My other pick, the Virtual Being, seems to be what she says she is -- an emissary of the Cylon God. But more on that later.

Everybody in SF is theorizing, like me, about the mysteries of Battlestar Galactica. I have prepared a list of what I think the major questions that you must answer if you have a theory of your own. There are also a few lesser questions that it's good if you can answer, but which are not mandatory. And indeed, even I don't really answer all of these easily, nor do I suspect the show will tie up all these loose ends. A few minor spoilers about Caprica here.

Well, not much is revealed in the recap episode of BSG that aired this evening, but two interesting impressions are confirmed:

In the BSG universe, it looks like nice planets are rare. As the fleet moves through space, it is regularly sending out scouting missions in Raptors, searching for food, resources and fuel. Depending on fuel available, I presume that means scanning thousands of planets. But what planets do they encounter?

Back in June, I touched upon Baltar, Christ and the Jews but I thought it might be time to look at all the religious issues in the show.

Let's look at some of them:

Many of you will have seen a popular composite image from the last minute of Revelations that puts together the various part of the sets and mattes for the ruined Earth. (And yes, all producer comments since then have pretty much confirmed this is Earth, so why the ruins look so recent remains a mystery.) I have some fancier stitching tools, so I put together a larger image that shows a lot more of the scene for you.

Several months ago, I produced a draft new page for the Battlestar Galactica Wiki, to replace their old page on Cylon speculation. The Wiki tries to avoid speculative pages but this is an exception. While most people liked the page, for whatever reason it has not become the active page yet. Rather than wait, I offer a link to my Wiki Page on Fifth Cylon Clues.

While we still have over a month to wait for the show, Sci-Fi channel is releasing clues and has made a site with a daily clue to tease the viewers. We will not see Caprica soon, as hoped so this may be what we get.

The first clue is interesting: "You have heard my voice countless times, yet you do not know my name."

I was recently at the World Science Fiction Convention (see another blog post) and attended a panel on BSG. It was a very disappointing panel, with two participants of no great qualifications, and a moderator who mistakenly felt what everybody wanted was to hear the two panelists debate the merits of 1970s BSG compared to modern BSG. Not that this isn't an interesting thing to talk about, but the fact that there was an older, cheesier source is about the least important thing about this show.

With so many candidates eliminated by various clues and pronouncements, one that has percolated to the top (not counting the Virtual Being who is my current leader) is the dead Ellen Tigh. She's not a very popular choice, since she was not a likable character, and not that major of one either.

A suggestion in a comment by a reader led me to an interesting hypothesis, which eerily fits the facts.

At the recent BSG panel at the San Diego ComiCon, some hints dash a number of hopes for the final Cylon. You can read IO9's article on important items from the panel.

Most telling is this line from Ron Moore:

"I can tell you it's someone you've seen. It won't be a guest-star"

Readers of this blog will know I believe there are extremely strong clues that BSG takes place in our far future, that Kobol is a future colony of Earth, and that there probably never was a real 13th tribe -- it's just a cover story for the true origins of humanity. (Well, I got that last part wrong...)

However, a lot of viewers still expect we'll see a plot more akin to the original Battlestar Galactica, where "life here, began out there." In that show, all the events took place around 1960, and Earth really was a lost tribe of Kobol. That plot turns out to be scientifically ridiculous, since there is massive evidence that we, and all the other life on this planet evolved from single celled organisms right here on this planet.

But, I have been asked, "could this be an alternate reality?" A fictional Earth, not the same as ours, in which we really are the descendants of ancient alien colonists. So I set out to explore how close you could come to our Earth in the BSG:1980 scenario.